Jigglers are a large rotund species that were introduced to Planet Earth.

The Jiggler species debuted in the original Dragon Ball series with Buyon, a large pink Jiggler kept by General White in the secret floor of his Muscle Tower. In Age 750, General White dropped the Saiyan survivor Goku and traitorous Android 8 into Buyon's lair within Muscle Tower in order to eliminate them. Buyon proved to be a difficult opponent for the young Saiyan, able to take a direct hit from Goku's Kamehameha without suffering any damage. However Goku eventually discovered Buyon's vulnerability to cold temperatures and used it to defeat him by breaking a hole in the tower's wall allowing the cold air from outside the tower to rush into Buyon's Lair, freezing Buyon solid allowing Goku to shatter him with a single punch, killing him.

The Jiggler's are revealed to be from a different planet in the computer game Dragon Ball Online. The Dragon Ball Online timeline reveals that during the Galactic Frieza Army's attack on Earth in Age 820 they brought many Jigglers along with them to counter the martial artists basic attacks, but are defeated by Goten and Trunks using swords.

By the time of Age 1000, Jigglers had become common on Earth, due to having been introduced to the planet by the Galactic Frieza Army. Some of these Jigglers have even adapted to cold temperatures, growing a layer of fur on their bodies.

Buyon in his stronghold at Muscle Tower in Dragon Ball

Gakin from Dragon Ball for the WonderSwan Color 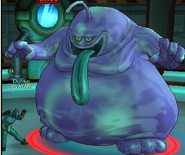 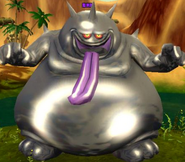 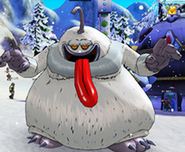 A Jiggler in Dragon Ball Online
Add a photo to this gallery
Retrieved from "https://dragonball.fandom.com/wiki/Jiggler_(species)?oldid=1562269"
Community content is available under CC-BY-SA unless otherwise noted.