Invisible Eye Blast is a Kiai technique shot from the eyes. It is used by both Goku and the Supreme Kai in the series, each on two separate occasions, and by Piccolo, Majin Buu, and Gogeta.

No instance of this attack has ever done any damage, but it appears that, unlike Goku, the Supreme Kai has a relatively powerful version, as he actually expected the blast to hold Majin Buu at bay.

The invisible eye blast has been used several times in the series. The first time it is used is during the Frieza Saga, after Vegeta just died from Frieza's Death Beam, Goku uses the invisible eye blast to dig a hole to bury Vegeta's corpse in. A little later, Frieza uses this technique against Goku, but Goku counters with the same technique, which ends up being thrown into the sea.

Piccolo uses the technique to destroy all the cameras at the 25th World Martial Arts Tournament to prevent reporters from revealing the Great Saiyaman's true identity.[3]

The technique is used is by the Supreme Kai against Majin Buu, expecting it to hold him. However, it proves useless, as Majin Buu is only temporarily disoriented. Thanks to Majin Buu's ability to instantly learn any technique he observes, he returns the attack and sends the Supreme Kai flying.[4] Soon, when Gohan is hit by Majin Buu's Vaporize! and is headed for outer space, Supreme Kai uses his invisible eye blast to destroy the energy ball, saving Gohan's life by a thread.[4]

This technique makes its first video game appearance in Dragon Ball: Xenoverse where it is called Evil Eyes and is one of Piccolo's Super Skills. The skill can also be obtained by the Future Warrior as a reward in Parallel Quest 13: "Tri-Race Coop". In the game, it functions similarly to Vegeta's Flash Strike skill as they both set off an explosion at their opponent's location the only difference visually is Evil Eyes has no hand gesture as it is fired from the user's eyes.

Frieza destroy a mountain with an Invisible Eye Blast 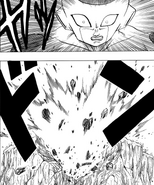 Frieza destroys a mountain with an Invisible Eye Blast

Piccolo destroys all the cameras in the Martial Arts Stadium

Gogeta's Invisible Eye Blast
Add a photo to this gallery

Retrieved from "https://dragonball.fandom.com/wiki/Invisible_Eye_Blast?oldid=1362765"
Community content is available under CC-BY-SA unless otherwise noted.