Manga: "Battle of the Bleeders"
Anime: "We Are the Five Warriors"

Invisibility is a special ability used by several fighters.

This technique is best for ambushing opponents, allowing for a sneak attack.

See-Through the Invisible Man is naturally invisible and uses this to his advantage in his battle with Yamcha, however he is revealed when Master Roshi nosebleeds all over him.

In the anime, Dercori is able to use a Mystic Talisman to camouflage herself or her other talismans.

Gamisalas uses this technique in the entirety of their appearance in order to remain undetected. In the anime, he is revealed when he is covered in dust, while in the manga Piccolo simply focuses on his ki signature to locate him.

In the anime, Nigrissi used his Camouflage ability in the Tournament of Power, in order to ambush Cabba, however, it completely backfired and was knocked away with a single kick. 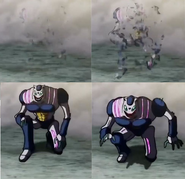 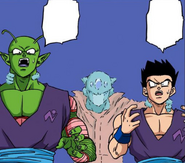 Seven-Three uses an Invisible Race's powers
Add a photo to this gallery
Retrieved from "https://dragonball.fandom.com/wiki/Invisibility?oldid=1884026"
Community content is available under CC-BY-SA unless otherwise noted.