Imprisonment Ball (懲役ボール, Chōeki Bōru) is a psychokinetic technique used by Frieza in his final form.

Frieza appears behind the opponent and holds his hand out, ensnaring them in an inescapable golden sphere of energy. He then toys around with this containment like a soccer ball. When Frieza is finished beating the victim around, he kicks the ball away, where it detonates on contact with anything other than Frieza himself. The resulting implosion is so immense it creates a vacuum that sucks in anybody near by.

Frieza uses this attack during his battle against Goku on Namek. When Goku blasts through a large landmass Frieza threw at him, Frieza appears behind him and captures him with the Imprisonment Ball. Frieza spends time smacking Goku around and fires an enormous energy wave at the sphere, blasting it crashing into Planet Namek. However, it is revealed that in the instant between the impact and the explosion, Goku is fast enough to escape not only the explosion, but the vacuum as well.

In the anime version of the Tournament of Power, Frieza utilized an Imprisonment Ball to paralyze Top. While it held him long enough for Frieza to deliver a barrage of attacks, Top broke free by powering up.

In the manga, Belmod uses a ki based variation of this technique to trap the other Gods of Destruction, holding them before attacking with his energy cards.

Later, Moro uses a magic version of this technique to halt Ultra Instinct Sign Goku from using his hands and feet.

In the anime, Android 17 uses his own variant of this technique using the Android Barrier.

Chamel also uses a magic version of this technique to trap the Demon Gods during the Dark Empire Saga.

In Dragon Ball Xenoverse, Frieza Race members use an unnamed variation of this technique when the Ki Blast button is held down. In this version the user takes the same stance Frieza does when performing the Imprisonment Ball, yet it takes the form of a Ki Blast that paralyzes the opponent when it hits. However this prevents the user from firing volleys of standard Ki Blasts like other characters.

In Dragon Ball Xenoverse 2, Charged Ki Blast: Paralyzing Type appears as a variation of the technique where the user fires a Charged Ki Blast using the Imprisonment Ball stance which takes the form of a Ki Blast that paralyzing opponents when it hits. However unlike in Xenoverse this technique is not exclusive to Frieza's Race as it can be applied to the Future Warrior by equipping certain Super Souls and functions as a Charged Ki Blast rather than a standard one.

In Dragon Ball FighterZ, Imprisonment Ball appears as one of Frieza's attacks under the name of "You May Not Survive This Time!". 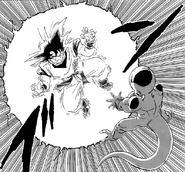 Frieza uses his Imprisonment Ball on Goku in the manga

The explosion the attack creates once it hits the ground

Frieza holds Top in the ball

Top powers up to break out

Frieza uses You Might Die This Time in Raging Blast 2

Retrieved from "https://dragonball.fandom.com/wiki/Imprisonment_Ball?oldid=1926732"
Community content is available under CC-BY-SA unless otherwise noted.