Hercule to the Rescue

Hercule to the Rescue

Hercule to the Rescue (、の！！, Chikyūgun, Saigo no Himitsu Heiki!!, lit. "The Earth Army's Final Secret Weapon!!") is the fortieth volume of the original Dragon Ball manga series. It is released in North America as Dragon Ball Z volume twenty-four, with the chapter count restarting back to one.

Breaking free from his master Bobbidi, the rampaging Boo turns the entire world into his candy store. To fight back, Goku transforms into his strongest form yet, the Super Saiyan 3. But the world's only hope may lie in Trunks and Goten, the world's youngest and most promising fighters. Using an alien fusion technique, they attempt to merge to form a single, even more powerful hero, Gotenks. Meanwhile, as Boo destroys city after city, the people of Earth call forth their secret weapon, the seemingly invincible (but actually incompetent) Hercule. 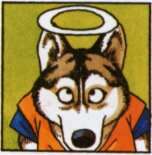 Gotenks returns from his first fight with Majin Buu (chapter 482)
Community content is available under CC-BY-SA unless otherwise noted.
Advertisement