Hakai (破壊, Hakai, lit. "Destruction") is a powerful ability used by the Gods of Destruction. In the manga, Goku is also able to use it while God of Destruction Mode Top can utilize it in the Super Dragon Ball Heroes: Universe Mission manga.

As Gods of Destruction, they possess the power to destroy almost anything with little effort, even working on intangible beings such as souls in the anime. People destroyed by Hakai do not go to Other World and simply cease to exist. However, in the manga, Beerus admits that Hakai does not work against people who are immortal.

This technique can be performed in several ways. In the anime version of the "Future" Trunks Saga, Beerus is shown doing it also by extending one of his hands, with his four main fingers straight up and his thumb crossing his palm horizontally and then announcing "Hakai". Beerus causes his target to quickly erase into nothing as he did with Zamasu. In episode 69, Beerus simply pointed to Dr. Mashirito with his index and middle fingers without saying a word. The effects on the victim are shown to be incredibly painful as Zamasu was shown screaming in agony as he was undergoing erasure. Ghosts, on the other hand, who are non-corporeal beings, do not display this, as shown with Dr. Mashirito. In the manga, Beerus simply extends his hand and by saying "Hakai" he throws a powerful blast that destroys his target, leaving nothing but dust. After achieving the Perfected Super Saiyan Blue, Goku is able to perform Hakai, however is much slower than Beerus', destroying Fused Zamasu progressively and requiring concentration throughout - thus Fused Zamasu takes advantage of the weakness by using Future Mai as a human shield, stopping the technique, Top also uses this method in the Dragon Ball Heroes manga, however Cumber is able to halt it with his fist. Belmod simply aims his palm at his target and they quickly turn to dust.

In the film Dragon Ball Z: Battle of Gods, Beerus taps an egg which sends destructive energy into it causing it to turn into lifeless dust. This is similar to how Beerus destroys Zamasu in the manga, albeit on a lesser scale and performed in a different manner though the results are pretty much the same.

In the anime, after Goku and his friends expose Zamasu's plan to murder Gowasu, steal his Time Ring, and then use the Super Dragon Balls to gain immortality and supposedly create a dark copy of Goku in order to eliminate all mortal life, Zamasu attempts one last strike against Goku. Before he could land the blow, he was intercepted by Beerus, who then uses Hakai to completely eradicate the corrupt Supreme Kai apprentice for his crime.[3]

In the manga, Beerus and Whis head to see Zamasu and Gowasu while Shin arrives on his own after checking Zamasu's future. Cornered, Zamasu reveals his true colors and desperately tries to attack, but Beerus easily catches his attack and uses Hakai, leaving nothing but dust.

In the manga, during his final fight against Fused Zamasu, Goku uses this technique by concentrating all the energy of the Perfected Super Saiyan Blue state on his hand, destroying almost half of Fused Zamasu's upper body, but is halted after the latter uses Future Mai as a human shield. Unlike in Beerus' prior usage, this Hakai is not instant and slowly destroys the target by progressing from one side of their body to the other.

In the anime, after Goku and Vegeta returned to the main timeline, Beerus uses Hakai on Dr. Mashirito's ghost during Mashirito's attack on the World Invention Conference for badmouthing him, destroying him permanently.

In the anime, when Goku announces to visit Zeno to remind him of his promise to hold a multiverse martial arts tournament, Beerus ponders about his leniency and briefly threatens to destroy Goku with this technique due to the perils his ingenuity could expose the universe to - moments before the latter tricks both the Destroyer God and his attendant and warps away.

In the manga, Belmod destroys a female extraterrestrial for insulting Marcarita.

While recruiting members for Team Universe 9, Sidra destroys an entire city that was into chaos after learning the possibility of having their universe destroyed in the Tournament of Power and also out of disgust for the savagery of the mortals.

When Krillin considers dropping out of the Tournament of Power after learning about its true purpose, Beerus threatened to destroy him, forcing Krillin to change his mind.

During the Galactic Patrol Prisoner Saga, Ultra Instinct Goku seemingly uses Hakai on the boulder that was on top of Moro, turning it into dust.

In the manga version of the Universal Conflict Saga, God of Destruction Top attempts to use Hakai to destroy Super Saiyan 3 Full Power Cumber but the Evil Saiyan blocks the attack with his fist.

In Dragon Ball FighterZ, Hakai appears as part of Beerus' Level 3 Super Special Attack, God of Destruction's Judgement (破壊神の裁き, Hakaishin no Sabaki). The attack is normally a Headshot, but if it does enough damage and the opponent is Goku Black, Beerus will instead use Hakai and erase the opponent from existence. Presumably, this is a reference to Beerus destroying Goku Black's past self, Zamasu. With the addition of Fused Zamasu from DLC Pack 2, Beerus will also use the Hakai on Fused Zamasu as well.

Super Saiyan Blue Goku can use the Hakai in Dragon Ball Heroes. In Super Dragon Ball Heroes: World Mission, Goku's Hakai Super Attack is localized as Destruction, however as the game lacks an English dub, Goku still refers to it as "Hakai" when performing the technique. His UVPJ-07 Goku (SSGSS) card is the one that allows him to perform Hakai as his Super Attack and features artwork of Super Saiyan Blue Goku using Hakai. Due to game mechanics, Destruction doesn't fully destroy the opponent as the opponent only appears to be destroyed, yet if the attack doesn't KO them or the opponent revives they will survive. 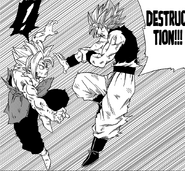 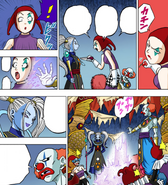 Retrieved from "https://dragonball.fandom.com/wiki/Hakai?oldid=1931428"
Community content is available under CC-BY-SA unless otherwise noted.