Gyaosu (ギャオス, Gyaosu) is the chief of the Penguin Village police force. He appears in several works by Akira Toriyama.

Gyaosu first appears in second chapter of the one-shot Wonder Island, as the boss of Gala and Pagos, though the three are not given names in this appearance. He summons Harry Senbon, the "top shooter in the world", at the Los Anguiris police office for a vital mission. While waiting for his arrival, Gyaosu and his men play war between Ultraman and Godzilla. When Harry arrives, Gyaosu asks him to stop a dangerous criminal taking refuge on Wonder Island who said that Gyaosu was "an old bald cross between Astro Boy and King Kong".

Gyaosu, along with his subordinates, was later re-used in Toriyama's later manga, Dr. Slump.

Gyaosu is first seen in Dr. Slump when Senbei had to go to the police station to pick up Arale after her and her new friends got in trouble after her first day of school.

Gyaosu is seen again when Arale is being a good citizen and constantly gives the police everything in Penguin Village saying it is lost.

He is told by Taro Soramame that the someone from the Red Ribbon Army is in town. He and the rest of the police force get armed up to take him on. They begin to head out but then get distracted and waste their time taking out King Nikochan's spaceship instead. 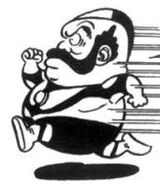