The Guide Robo[1] (誘導ロボット, Yūdō Robotto[2]) is a servant robot that appears in Dr. Slump and Dragon Ball Z: The Return of Cooler.

He is a small, brown robot that is apparently based on Tori-Bot in appearance.[2]

The Guide Robo first appears in Dr. Slump as an interpreting robot used by the aliens who give Turbo his abilities after accidentally hitting him with their spaceship.

The Return of Cooler

The robot escorts Gohan, Krillin, Yajirobe, Master Roshi, Oolong and a group of Namekians through the Big Gete Star in order to take their energy and use it for fuel.

He insists that he does not want to hurt them, but ironically plans to "just want to chop you up". Like the Cyclopian Guards, he has transforming and expendable appendages that are quite strong, to the point where all of the present company, not even Gohan or Krillin, could pull Yajirobe free from his grasp. The guide robot traps the prisoners in a cage, making him just as evil as Cooler. Once the main core of the machine planet is destroyed, the robot's singing about "chopping them up" is interrupted when he blows up.

The Guide Robo is capable of taking a punch from Yajirobe without budging.

The Guide Robo appears and was named in Dragon Ball Z 2: Super Battle. It appears during Dr. Gero's ending. 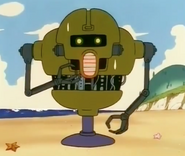 The interpreting robo from Dr. Slump