Sacred World of the Kais of Universe 10

Gowasu is the Supreme Kai of Universe 10 and Zamasu's master.

Gowasu is an elderly Shinjin with light, yellow, wrinkled skin, pointy ears, and white hair in the style of a mohawk. He wears a gray and yellow coat with a violet shirt underneath, a light blue sash, darker blue pants, and white boots. He also wears gold and green Potara, the decoration of the Supreme Kais.

As an experienced, elderly, and wise Supreme Kai, he respects all living creatures, both good and bad. He is open at recognizing the proper place and role of the Supreme Kais, which are the Gods of Creation, is watching and caring for the balance of the universe, creating life without interfering directly with it. He also acknowledges that only the Gods of Destruction are allowed to eliminate life in their jurisdiction. He repeatedly tries telling his pupil Zamasu that mortals need to be raised and looked after when Zamasu asks if mortals would be better off destroyed, explaining that it is their purpose. Multiple times, Gowasu has shown frustration with Zamasu's behavior and reluctance, such as his silence after explaining their duties to mortals and his hostility towards Goku after being defeated by him. He, along with other Supreme Kai, fear the power of Gods of Destruction, as when he comments on Goku's power rivaling Beerus', he apologizes when he sees it agitated Beerus. He also likes to make a joke every once in a while, showing he has a sense of humor.

He is shown to be with Zamasu drinking tea that Zamasu made, saying that it is delicious. He then tells him about his responsibilities as a Supreme Kai, watching over everything in their universe, including mortals. Zamasu then asks him if the mortals are worth their protection due to their past mistakes. Gowasu explains that their duties are to create, not interfering with creation. Zamasu asks if Gowasu wants him to look past the mortal's mistakes and Gowasu tells him to watch over and raise them, explaining that it's their purpose. Gowasu grows frustrated when Zamasu is silent and shows reluctance, repeatedly imploring him for a response. Zamasu replies, accepting his duty to creation and mortals.

Beerus, Whis, and Goku then show up, with Goku asking Zamasu for a fight, but is then stopped by Beerus. Beerus then tells them about someone who is similar to Goku, and how he has a Time Ring. Gowasu then shows them their Time Rings and how they are all accounted for. He then watches Zamasu's fight with Goku. Surprised by Goku's transformation to Super Saiyan 2, and how he fought Beerus and survived, even marveling at how Goku's power rivals Beerus'. Goku overpowers Zamasu, winning their fight and Gowasu reprimands Zamasu for being hostile towards Goku. Beerus, Whis, and Goku soon leave, with Gowasu wondering if Zamasu's distrust for humans has past, unaware it has only increased.

Gowasu and Zamasu become aware of the humans on the planet Babari while sitting and having tea. With Zamasu advocating for their destruction, Gowasu asserts that it is the place of the God of Destruction to carry out that act, not the Supreme Kais. Gowasu then shows Zamasu the Time Ring, explaining its function to him. Gowasu prepares for the two to depart to the future of Babari, passing Zamasu an earring and allowing him to be a Kaioshin for the time being. Gowasu makes sure Zamasu puts the earring on the ear corresponding to Gowasu's to ensure the pair do not fuse. The two fist bump and say "1000 years", transporting into the future of Babari where Gowasu comments on their move toward a peaceful society before a fight breaks out between the planet's denizens. At a later time, Gowasu and Zamasu further spectate the Barbarians, when one appears behind them and attacks. Despite Gowasu's protests, Zamasu uses his Energy Blade to kill it. Back at the Sacred World of the Kais, Gowasu berates him, telling him he could have lead a change within the Barbarians.

Later, Gowasu is watching Goku's battle with Hit during the Universe 6 and 7 Gods of Destruction Selection Martial Arts Competition, also telling Zamasu about the Super Dragon Balls when the apprentice asked about them.

The next morning, Gowasu noticed Zamasu was gone after finishing his tea. Sometime later, Beerus, his attendant, Goku, and Universe 7's Supreme Kai visited his home, concerned of his well-being. They then ask about Zamasu and his thoughts of bringing "justice" to the world in which Gowasu claims that Zamasu was concerned about the topic for a long time but that he finally is in peace with his thoughts and never wishes to distrust humans again. Just then, Zamasu suddenly appears ready to serve Gowasu tea.

Zamasu is then seen reintroducing the people to himself and asks why they are here. Gowasu tells him that they were looking for Zamasu. Beerus then claims that it is because Goku wanted to fight Zamasu again, refusing the God's orders. However, the group told the Kais that they would leave, as they did not want to disturb their tea time. Before they left, Beerus's attendant gave them a little gift, tea and sweets from a planet from Universe 7, Earth. Gowasu then thanked the attendant and the group left. Zamasu gives him tea, in which Gowasu saw suspicious, as it was a different tea then the one his apprentice usually gives him. However, he ignores, as is has a good fragrance and drinks it. Eventually, Gowasu is killed when Zamasu cuts him from behind with his energy blade. Watching this, Whis uses Temporal Do-Over to rewind time and stops Zamasu's attack, undoing Gowasu's death. With the right evidence, the Universe 7 group confront Zamasu and explain everything to Gowasu. Cornered, Zamasu prepares to attack, but he is intercepted and instantly destroyed by Beerus. Gowasu silently says Zamasu's name as he lament on how his apprentice had to die for his horrible actions.

In another timeline Gowasu was murdered by his apprentice with no one there to interfere, passing on his position and the Time Ring to Zamasu.

As a Supreme Kai, and the mentor of Zamasu, Gowasu is strong, though the true scope of his power is left unmentioned.

Gowasu makes his debut in a video-game and as a playable character in Dragon Ball Heroes, introduced in the tenth mission of the God Mission series (GDM10). 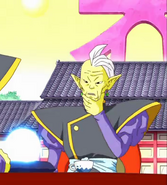 Gowasu
Add a photo to this gallery

Retrieved from "https://dragonball.fandom.com/wiki/Gowasu?oldid=1497099"
Community content is available under CC-BY-SA unless otherwise noted.