Back From the Other Side
"Goku, Hurry!" (３, San-Jikan, lit. "Three Hours") is the twenty fifth chapter of Dragon Ball Z and the two hundred nineteenth overall chapter of the Dragon Ball manga.

The cover of this chapter features Goku rushing to get to Earth in time to save his friends.

To everyone's surprise, Nappa has easily survived Tien Shinhan's attack, Spirit Tri-Beam. Having used up all his energy on that final technique, Tien then falls to the ground dead. We then go to The Lookout, where we see Mr. Popo and Kami. Kami is worried and curious as to why Goku has not arrived yet. He also then gets a bad feeling. He senses that Piccolo will soon die. We then return to Earth, where the battle continues. Piccolo suggest to Krillin that Nappa is accustomed to aerial combat, and they should continue their fight on the ground, so both fly to the ground. Nappa, completely unphased by this, charges at Krillin and Piccolo. Before Nappa can attack Vegeta shouts for him to stop, which he immediately does. Vegeta then asks if this "Son Goku" they have been referring to was actually Kakarot. Krillin says it is, then Vegeta begins to taunt them, stating he is no match for them if he could not beat a person such as Raditz. Krillin exclaims Goku has become much stronger over the years, but Vegeta is still highly unconvinced. He is amused, however, so he decides to wait 3 hours for Goku's arrival. Nappa is not pleased with Vegeta's choice, so he continues to charge at Krillin and Piccolo. Once again, Vegeta commands him to stop. Nappa listens, and then apologizes for being so impatient. The Saiyans and the Dragon Team then group together, waiting the agonizing 3 hours. Goku is seen doing his best to get to the battle, flying along Snake Way. The 3 hour wait is over, and the fight continues. 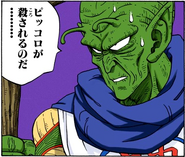 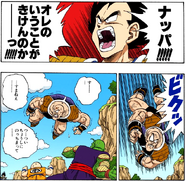 Vegeta stops Nappa in his tracks, demonstrating his authority

Vegeta's scouter goes off, indicating the three hour wait for Goku has ended