A Warrior in Hell

The cover of this chapter shows scenes of Piccolo and Gohan in the top panel, Goku running down Snake Way in the middle down panel, and Krillin, Master Roshi and Bulma riding in a plane in the bottom panel.

Piccolo brings Gohan to a shallow lake somewhere, and wants him to wake up. He’s been sleeping since Raditz knocked him out, and so Piccolo drops him in and gives him a rude awakening. Piccolo explains that he has something to tell him, and then Gohan gets scared and runs around crying for his father. Piccolo yells at him to shut up or he’ll break his neck. Then he calmly says to listen. “First of all, your dad is dead! He sacrificed himself in order to defeat that man.” Gohan then begins crying, and Piccolo insists he really will break his neck.

Piccolo explains that Goku’s friends will use those Dragon Ball things to return him to life soon, but that’s not the problem. Two more bad guys even worse than the last one are coming to attack the Earth in one year. Even if Son Goku returns to life, the two of them won’t be enough. “We need your power!!” And so he’s going to train Gohan to protect the Earth. Gohan insists that he can’t fight, but Piccolo insists he has a lot of hidden power, and he plans to bring it out. Piccolo decides to prove it by grabbing Gohan by the head and throwing him at a nearby mountain! At first, Gohan is scared as he flies toward it, but then, somehow or other, he gets mad and charges up to unleash a blast that completely obliterates the mountain.

Gohan can’t believe he really did that, and Piccolo explains about his true hidden power coming out when he gets high strung, but he can’t win battles like that. Gohan doesn’t want to become a martial artist, he wants to be a great scholar, though. Piccolo says that’s all fine and dandy, as long as he defeats the two Saiyans coming in a year who plan to wipe out all the Earthlings. Gohan says he’s scared, and Piccolo threatens to kill him. “There’s no time, so we’ll begin right now!!! Take off your jacket!!!” Gohan says he wants to train under his father when he comes back to life, and Piccolo laughs and insults Goku. Goku then sneezes as he continues along Serpent Road.

With his life on the line, Gohan fires a mass of energy 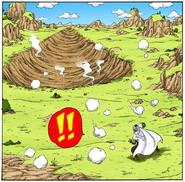 The crater left in Gohan's wake