All Gods of Destruction possess this state in full. The Universe 11 God of Destruction candidate Toppo is able to access it by giving up his belief in justice, which he does during the last minutes of the Tournament of Power in an attempt to defeat Team Universe 7.

In the anime, when the user is fully charged up in this state, the markings on their body turn a glowing purple color.

In the anime version of the Universe Survival Saga, deciding that justice was worthless, Top was able to enter God of Destruction Mode. When Top used this transformation in the Tournament of Power when fighting Frieza in his golden form, his power increased dramatically to the point where it surpassed Frieza's - even without Top using the form's full power. Simply one Energy of Destruction sphere was enough to greatly wound Frieza and revert him to his previous form, at the same time warping the entire World of Void to change the sky color from green to a cosmic space theme of deep purple and blue hues. From then on, Top was able to pummel Frieza into submission. Even in this mode Top was captured by Frieza's Imprisonment Ball but was able to break free by powering up. Facing Super Saiyan God SS Evolved Vegeta, Top proved to have an advantage against his foe and almost defeated him. However, when Vegeta powers up due to his determination to save his family and Cabba, Top found his power completely outmatched, with his Energy of Destruction being canceled out by Vegeta's more potent godly ki, and even with the full power of this state Top was knocked out of bounds by Vegeta's Final Explosion. This form does not exist in the Dragon Ball Super manga, with Top instead using the Aura of a God.

In the manga version of the Universal Conflict Saga, with the battle between Top and Super Saiyan 3 Cunber at a near stalemate, Top decided to take on this mode while Cunber began utilizing the full power Super Saiyan 3. The two fought equally before both being taken down by a single swipe from Ultimate Kamioren.

In the Dragon Ball Super Card Game, Beerus and Champa start in their "base" forms and can power up into their God of Destruction states. 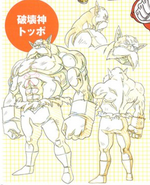 God of Destruction Toppo art
Add a photo to this gallery

Retrieved from "https://dragonball.fandom.com/wiki/God_of_Destruction_Mode?oldid=1893144"
Community content is available under CC-BY-SA unless otherwise noted.