Dragon Ball Wiki
Register
Don't have an account?
Sign In
Advertisement
in: Characters, DBGT Characters, Characters who can fly,
and 4 more
English

Giru (ギル, Giru, Gill), originally known as T2006 or DB4649T2006RS, is a Machine Mutant that accompanies Goku, Pan, and Trunks on their quest to find the Black Star Dragon Balls. He is best friends with Pan; however, he is frequently the recipient of a lot of abuse (both verbal and physical) at the hands of Pan, which makes him somewhat fearful of her.

Giru looks similar to that of the Machine Mutant Guards of his kind but smaller in size with a white coat. He has arms and legs that can retract inside of his body and has a single glowing red eye.

Giru is shown being rather cowardly, cowering at immediate sign of danger. Although Giru is cowardly he does show some sigh of bravery, when he saved Pan from a giant sandworm on planet Rudeeze and when he attacked Baby when he attempted to hurt Trunks.

When they reach Planet M-2 Giru "betrays" the group. Later on it was shown that he was only just pretending, as ordered by Trunks proving himself to be a loyal companion.

Trunks, Goku and Pan first meet Giru on Imecka while he is on the brink of death. After eating the Dragon Radar for energy, he tries to escape from them, but is ultimately caught by Goku. After that, the three Z Fighters find out that Giru has integrated the radar's functionality into his software. Giru then helps the group on various planets, such as Monmaasu, Gelbo, Beehay, Planet Luud, and Rudeeze.

Upon arriving on Planet M-2, Giru "betrays" Trunks, Goku, and Pan, though he is actually pretending, as ordered by Trunks. Giru was initially programmed to find and lure the Saiyans to the planet in order to use their DNA, but due to a memory failure, he forgot the entire thing until the team nears Planet M-2. He tells Trunks the truth of his mission and together, they decide to make the inhabitants of the planet believe that Giru is acting according to their programming, by giving them data to capture Goku, Pan and Trunks.

After Giru sets the trio free, they find Dr. Myuu's evil creation, Baby, and they seemingly destroy him. After Trunks and Goku finish off General Rilldo, the gang leaves the planet for good.

Upon returning to Earth and discovering that Baby has taken over, Giru attacks Baby Vegeta with a missile, only to be "killed" with a single energy blast. Later, Mr. Satan and Pan discover his "corpse", and a grief-stricken Pan takes it with them. After Baby's defeat, he is repaired by Trunks.

Main article: Super 17 Saga Giru restores Gohan's legs and left arm back to normal after they are converted to metal by General Rilldo.

Later, Giru and Pan capture Dr. Gero when Super 17 is about to finish Vegeta and tell him to call off the android. Dr. Gero is unable to do this because Dr. Myuu had reprogrammed Super 17 and proved it by telling Super 17 to kill Dr. Gero. Giru is damaged and Pan is knocked out when Super 17 fires the Full Power Energy Wave meant to destroy Dr. Gero.

Giru goes with Goku and Pan to search for the seven Shadow Dragons using his built-in Dragon Radar to track the evil beasts. He is instrumental in the defeat of Haze Shenron, as his mechanical nature makes him immune to the two-star dragon's debilitating pollution. Consequently, Giru is able to drag Goku and Pan to a freshwater geyser at the bottom of the polluted lake they were thrown into, allowing his friends to clean the water and regain their strength.

He is fatally damaged by Eis Shenron, though he is resurrected when Goku makes his last wish upon Shenron. Giru is last seen leaving with Videl, Bulma and Mr. Satan.

When realizing Giru has turned traitor Dr. Myuu and the Battle Type M2s are powerless to stop him. Giru is then able to hold his own against a Battle Type M2. Later he easily catches a missile from HWM 100 X.

In the Xenoverse series, the Capsule Corporation Robots used by the Time Patrol also bear a resemblance to Giru save for their lack of legs (as they either Levitate or move around on wheels) and are equipped with Scouters.

In Xenoverse, Giru makes a cameo appearance in the game's version of the Shadow Dragon Saga as part of the GT Saga (Second Half) which is part of the GT Pack 2 DLC. While Pan, Giru, and Goku are being confronted by Nuova Shenron, Giru detects a second Dragon Ball to the confusion of Pan who chases after him. It is later revealed that Giru detected Dark Eis Shenron's 3-Star Dragon Ball, though Giru and Pan are saved by the intervention of the Future Warrior who had been asked by Goku to aid Pan and Giru while he dealt with Nuova Shenron.

In Dragon Ball Fusions, Giru can be found in Satan City where he runs the quiz place where Tekka can take one of several quizzes once a day. Giru will quiz them on their knowledge of the Dragon Ball series rewarding them on how many questions they get right. If they manage to get all 10 questions right, Giru will reward them with EXP and random Learnable Special Moves.

In Xenoverse 2, while protecting the Satan House Time Rift anomaly alongside the Saiya Squad in their role as Great Saiyaman 3, the Future Warrior is informed that Giru has been damaged and Pan needs the Saiya Squad's help in recovering Giru's parts from Planet Tuffle while fighting off the evil Shadow Dragons Nuova Shenron, Eis Shenron, and Omega Shenron. After recovering Giru's parts, Pan thanks them by giving them one of Jaco's missing Spaceship parts she had found.

In Dokkan Battle, Giru appears on the Home Menu's Recommend Characters button which allows access to the Recommended Characters menu where the player can view characters that can be obtained through currently available events or through Dokkan Awakening. Additionally on January 29, 2019, two Giru cards were added to the game as part of the Story Event "Desert Rescue! Giru Saves the Day!" which is an adaption the adventure on Rudeeze from the Black Star Dragon Ball Saga. On July 7, 2019, both the cards and the event where released on the Global version. 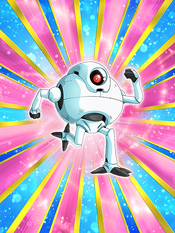 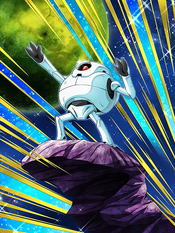 In World Mission, Beat (the main playable protagonist) can acquire his own Hero Robo (the English localization for Hero Robot) from Lulu after completing all of its Tutorial Missions. Lulu gives Beat a Capsule containing his Hero Robo which like Beat can be named by the Player. The Hero Robo can be equipped with different Modules which can be placed in slots grouped by the Round (R1/Round 1, R2/Round 2, R3/Round 3, R4/Round 4, and FR/Final Round) they can be used. Each Round starts with three open slots with two locked slots (ten locked slots total). Each locked slots can be unlocked by a wish to Super Shenron (that's ten wishes to unlock all of them). Once all locked slots are unlocked, the Hero Robo will have a total of 25 slots (five slots per Round). However only one Module can be selected however the player has the choice of any Module within the Round selected though they must wait until said Round of Battle to use it. There are different types of Module some buff stats while some debuff enemy stats. Missile Modules allow the Hero Robo to attack enemies.

There are two specific Modules of particular interest, Capture Modules and Summon Modules. Capture Modules are represented by a Camera Icon and allow the Hero Robo to scan and capture enemies in Arcade Mode. Different Enemies have different capture rates which is shown by a percentage that appears when targeting an enemy with the Capture Module. Enemies marked "Capture OK" (they will also emit a golden glow when selecting a Capture Module target) will have their data converted into Cards for the Hero Robo's Capture Log which contains card data that can be used to fill Empty Summon Modules.

Random Modules can be acquired after every battle and discarded Modules are converted into EXP for the player's Hero Avatar with the Module's rarity determining the amount of EXP. Rare Modules can also be acquired via a wish to Super Shenron (though it is best to wait until all slots have been unlocked).