This article is about Broly's energy shield. For the similarly named technique, see Gigantic Hammer.

Broly charges a green energy shield around his body. Then, he jumps up into the air and drops down to punch the opponent away onto the ground, inflicting considerable damage.

Broly uses the second half of the attack while attacking Goku at the dead of night in the movie Dragon Ball Z: Broly - The Legendary Super Saiyan, which results in Goku's bed being bent from the force of the punch. He uses the first half of the attack twice to smash through the canyon created by his fighting Goku, Gohan, and Future Trunks while in hot pursuit, as well as to charge up a Super Explosive Wave near the end of the battle to fling Goku away. While not as an actual attack, Broly also utilized the first half as a baby to survive Planet Vegeta's destruction.

Broly also uses the first half several times in Dragon Ball Z: Broly - Second Coming, namely to charge up a Super Explosive Wave that managed to crumble the ground that Gohan, Goten, Trunks, and Videl were on before launching himself to the sky, although only Gohan was left unaffected enough to pursue him, and later to demonstrate his survival from the lava pit that Gohan tricks him into entering earlier, as well as a failed attempt at resisting the Family Kamehameha.

Gigantic Slam was named in Dragon Ball Z: Burst Limit and Dragon Ball Z: Infinite World, where it appears as one of Broly's super attacks in his Legendary Super Saiyan form. 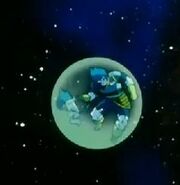 Broly with his Gigantic Slam

Broly uses the jump and punch portion of the attack on Goku (reused for the cover of the Broly Triple Threat DVD collection).
Add a photo to this gallery
Retrieved from "https://dragonball.fandom.com/wiki/Gigantic_Slam?oldid=1814020"
Community content is available under CC-BY-SA unless otherwise noted.