Ghetti Macareni (ゲッティ, Getti) is the younger brother of the Macareni Siblings, and a regular foe of the Galactic Patrol.

In his brief skirmish with Piccolo, Ghetti utilizes an energy whip as his means of offense, though even with his weighted cloak still on, Piccolo was much to swift to be hit by him. He was quickly defeated after Piccolo grabbed him and threw him into his brother. 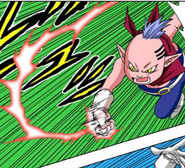