General Blue And The Pirate Treasure (！！ブルー, Tsuiseki!! Burū Shōgun, lit. "General Blue's Pursuit!!) is the seventh volume of the original Dragon Ball manga series written by Akira Toriyama. It was released on May 8, 1987 in Japan and in March 2003 for the English version. It continues the General Blue Saga and begins the Commander Red Saga. It also crosses over with Toriyama's previous manga series Dr. Slump.

Only Goku, Bulma and Kuririn stand between the Red Ribbon Army and the seven Dragon Balls which can grant any wish in the world! Using a submarine loaned by Kame-Sen'nin, the heroic trio explores a pirate's undersea cave in search of the next Dragon Ball, but gun-toting bad guys are on their tail! Now they must face not only perilous pirate traps but the sinister General Blue, a martial artist with powers even Goku doesn't have! Can they escape the cave alive? As the battle continues, Goku and General Blue go to Penguin Village, the home of the weird scientist Dr. Slump and one of the strangest places on Earth![1]

This section, or a part of it, has been transcluded from Bulma Returns; any changes involving it should be made there instead. /

Legend says whoever gathers the seven magical "Dragon Balls" will be granted any one wish. Son Goku, a young boy from the mountains, first heard the legend from a city girl named Bulma. After many dangerous adventures with Bulma, Goku trained under the great martial artist Kame-Sen'nin and competed in the "Strongest Under the Heavens" fighting tournament. Afterwards, Goku resumed his quest for the Dragon Balls, only to find that a powerful enemy, the Red Ribbon Army, was also searching for them. Now, Goku and his friends have gone Dragon Ball-hunting in a pirates' cave—but the bad guys are right behind them![1]

"Just recently, I had a kid. A boy. I've finally become a father. I think I'm a little disappointed that my wife and I can't go off and have fun any more, without a care in the world, atleast not as easily as we used to. But once he's a little older, the three of us can go places together, and more of all, he's really cute, so I forgive him. Besides, I can use my child makes as an good excuse to go to the toy store. So as a result, I'm helping to change diapers while I draw."[1]

Info below is retrieved from Viz Media.[1]

Differences from the anime 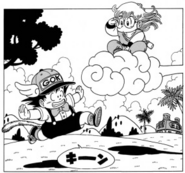 Illustration for the chapter in Penguin Village, "The Stolen Dragon Radar"