Rank Two of the Frieza Force

Garana (ガラナ, Garana) is a rank two of the Frieza Force during Sorbet's time as acting leader.

Garana's physical appearance is that of a gorilla-like humanoid with a Mohawk hairdo. He wears a white version of the newest Battle Armor model.

Main article: God of Destruction Beerus Saga In Age 778, Garana and his soldiers were searching for the Dragon Balls when they discovered a giant Dragon Ball, however, upon sighting it they also noticed Champa and his attendant, Vados. Champa promptly attacked them with his finger beam, obliterating them and their ship.

It was said by Shisami that Garana is the second strongest member of the Frieza Force in Age 778. He was also trusted by Sorbet with leading the search for New Namek in order to secure the Namekian Dragon Balls to revive Frieza. Though he failed to locate New Namek his team did manage discover one of the Super Dragon Balls located within Universe 7 showing that he is a capable leader given they manage to discover the existence of a different set of Dragon Balls that were even unknown to the Dragon Team at that point in time. It was only after he and his search team were annihilated by Champa (who sought the Super Dragon Ball they had located) that Sorbet gave up on finding New Namek and risked going to Earth with Tagoma to revive Frieza with the Earth's Dragon Balls. 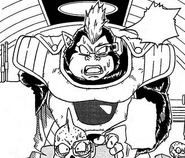