Gamelan (마장 가멜란, Gamelan "Demon General Gamelan")[1] is the general of the Dark Namekians, and thus is known as the "Demon General".

Gamelan is an evil Namekian who leads the Dark Namekians as their general. He seems to envy the divine position held by Grand Elder Moori's younger brother Dende as his goal is to become the God of the Narak-type Namekians with the upper level of Chocolay Tower acting as his equivalent to The Lookout while Chocolay plays a similar role to Korin as Chocolay is his evil counterpart who can cultivate evil lifeforms such as Dark Senzu Beans. Additionally the Black Mashenlong Mr. Poko Poko wears clothes like Mr. Popo and resembles a cross between Mr. Popo and Porunga though can also be seen as an equivalent to Shenron implying that Gamelan seeks to create a dark mirror of the divine hierarchy of Earth.

While evil and willing to brainwash normal Namekians like Vibra to serve as members of the Dark Namekians (possibly influenced by his allies the Time Breakers' use of Time Breaker Mind Control) and will forcefully assimilate unwilling Namekians to increase his own power, he is similar to Demon King Piccolo in that he trusts his fellow Demon Clansmen however this lead to his downfall as Week a Dark Namekian Elder who joined the Time Breakers to betray him when his failure resulted in the fall of Chocolay Tower, causing Week to call him a fool before murdering him in cold blood.

At some point Gamelan was made general of the Dark Namekians, he also named the Black Mashenlong "Mr. Poko Poko". When Chocolay Tower began producing ki, Gamelan was one of the few allowed on it's upper level.

Around Age 1000, Piccolo was investigating the movements of Gamelan throughout the Dark Namekians headquarters at Isuri's Lake. However, when the Time Patrol were sent by Piccolo to locate Vibra, they found that he was not in Narak's hideout, discovering that Gamelan was heading towards Chocolay Tower in an attempt to become Narak's god.

The Dark Namekian traitor Vibra - free from corruption - attempted to kill Gamelan, dying in a failed attempt at destroying him by self-destructing. Gamelan was eventually defeated by the Time Patrol in Age 1000, when he realized that he was outmatched he tried to stall until Week would arrive to aid him, at the conclusion of the battle however, when Week does arrive he calls Gamelan a fool for allow Chocolay Tower to fall and thus failing the Time Breakers, Week then kills Gamelan.

As a leader of the Dark Namekians, he is very powerful and Piccolo is unable to deal with him. When fought by the Time Patrol, he is capable of fighting against the Youth, even in their races' transformation (Super Saiyan/Pure Majin/Great Namekian). As the boss character of Chocolay Tower, he is stronger than Captain Wada, the boss of Oil & Gas Station, however he is weaker than Cell-X. 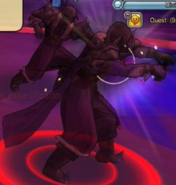 Two of Gamelan's Evil Inside Spirits