"A Farewell to Arms (Cell's timeline)

"His Name Is Cell" (Cell's timeline)

Leader of the Cold Force (retired)

In the alternate future timelines, Future King Cold and Future Frieza journey to Earth to destroy it in August of Age 764. Before they start their assault, Future Goku returns to Earth via Instant Transmission and successfully kills Future Frieza and Future King Cold. It was at this point that King Cold and Frieza had their DNA sampled by Future Dr. Gero's Remote tracking device for the creation of Cell.

In Dokkan Battle, Future King Cold appears as a non-playable boss character and represented by his counterpart's Mightiest of Monarchs character card. 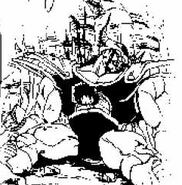