"A Message From the Future The Incursion of Goku Black!"

Future Babidi (未来のバビディ, Mirai no Babidi) is an alternate timeline conterpart of Babidi that was killed by Future Trunks in an effort to stop Future Majin Buu from awakening in the future.

Main article: "Future" Trunks Saga In the anime, Future Trunks has become much stronger, having been instructed by Future Supreme Kai. He faces Future Dabura and destroys him along with Babidi. He was shown to be simply watching the fight against Future Dabura and Future Trunks, holding the device that was meant to absorb energy to awaken Future Majin Buu.

Future Babidi was planning to resurrect Future Majin Buu, with the help of his henchman, Future Dabura. Future Babidi appears in the World Martial Arts Tournament with Future Dabura and steals the energy of the tournament fighters, including Future Trunks' energy.

When Future Trunks decides to bring the Dragon Team of the past to help him, Future Babidi creates Fighting Puppets (more powerful clones of Frieza, Android 18, Cell, and the Z Fighters) from Future Trunks' memories to fight with them. Future Babidi manages to take control of Piccolo, but the Z Fighters save Piccolo from Babidi's Manipulation Sorcery, however, Vegeta lets himself fall under Future Babidi's spell again. This time, Goku manages to bring him back to his senses. The energy of the battle between Majin Vegeta and Goku revives Future Majin Buu, but Buu refuses to listen to Future Babidi. Future Babibi sees that he has been killed by Buu in Piccolo's memories, and he remembers seeing Namekian Dragon Balls in Piccolo's memories. In order to change his fate, Future Babidi leaves Future Buu in Future Dabura's care and goes off to New Namek in order to use the Dragon Balls to place Buu under his control.

Future Babidi about to be killed by Future Trunks 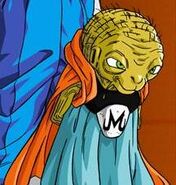 Retrieved from "https://dragonball.fandom.com/wiki/Future_Babidi?oldid=1810614"
Community content is available under CC-BY-SA unless otherwise noted.