Fukurou Forest[1] is an area on Earth located north of the Sacred Land of Korin, near Yahhoy. It is the location of a Ninja Stronghold that is home to Ninja and Samurai. 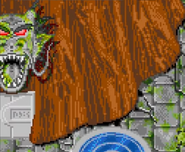 The entrance to the Dragon Ball pedestal