Fu-Lums are a race of humanoid monsters created from Lord Piccolo's blood and DNA and make their debut in Dragonball: Evolution.

The Fu-Lums are Lord Piccolo's servants. These warriors have several eyes and have several bones out of their bodies. Fu-Lums carry Naginata Blades. They are created by a machine that drains Piccolo's blood and animates the bodies inside the tubes. Originally, there was only one Fu-Lum. They have the ability to multiply whenever their body parts fall off.

The first Fu-Lum was created on Mai's ship after she releases Piccolo and gathers some of the Dragon Balls. After many more are made, they later attack Goku and his friends by a volcano, but despite proving themselves dangerous enemies they are all killed when the heroes knock them into the lava, when melee attacks prove ineffective.

In Dragonball Evolution: The Game on PlayStation Portable, Fu-Lum is an unlockable playable character. The Fu-Lum can turn their defeated enemies into one of them as seen in the Fu-Lum's Arcade Mode epilogue. 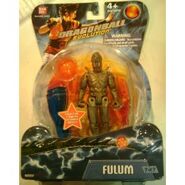 Fu-Lum with his double bladed sword

Retrieved from "https://dragonball.fandom.com/wiki/Fu-Lum?oldid=1721462"
Community content is available under CC-BY-SA unless otherwise noted.