This Forum has been archived

Currently, our wiki uses the names "Bills" and "Whis" as the "official" names for said characters. User:Jeangabin666 insists that the image to the right, which is a cover for a Nintendo 3DS, provides confirmation of the name "Bills". However, two interviews have been provided from both Akira Toriyama himself and his editors. There is absolutely no mention or wording of the name "Bills". There is however, the explanation of the name "Birusu" and its play off the word "virus". However, one of his editors, specifically Shueisha, states it is a play off the word "beer", and thus his name is "Beers". You can read more about this in the links to the interviews below. Now, having said this. "Bills" is incorrect, it needs to be changed. As such, I say we as a community vote on our official naming scheme (at least until the film is dubbed into English). So, do we call him Birus or Beers? Given that we choose "Whis" for "Uis", which is a play off Whiskey, it would make sense to call him "Beers". On the other hand, as stated above, "Birusu" is a play off the word "virus", so do we call him "Birus"?

First the two interviews with Toriyama were written in Japanese, and Bills' name there appears as "ビルス".

We have to use official spellings.

There is two official spelling in our alphabet for Bills: 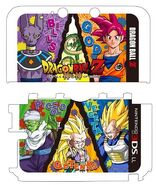 Whis is is always written Whis.

First off, I hate to be that guy and tak down the vote, but we need to try and find a consensus. Voting is a last resort and should only be used for matters that are 100% opinion, such as which infobox pic is best out of two similar ones.

Now, let's not concern ourselves with fan sites. The three sources I went to for mainstream English translations, this is to say translations that get viewership much larger than DB fan sites including ours and Kanzentai, were Anime News Network (Birusu), Wikipedia (Birus), and IMDB (Bills). Anime News Network is probably the purest transliteration, and Wikipedia is probably the most popular of those sites. Thoughts on these? --

What is Whis' official Japanese pun? It's easier to decipher Bills' pun if we can confirm Whis'... pun name. Either way, the article doesn't necessarily have a inaccurate or accurate naming scheme as they are all variations of the same name with alternate pun meanings. Birusu is probably the most accurate as it's the Japanese variation; we still don't have official English confirmation names for Abo, Kado, and Aka, so this may take quite some time for the English variant for this character to be confirmed as well. -

Nah, I understand why you wouldn't want to use a vote to determine a consensus. Normally, I'd say "Bills" would be a safer name to choose, since the sounds in the Japanese name could be transliterated that way later on (feel free to ignore this logic however, I am aware that the Japanese alphabet does not use the "l" sound). Upon further examination of the sources that SSJGoku93 provided, however, I actually do find it more likely that the antagonist's name would be either "Beers" or "Birus," something to that effect. I find it highly unlikely that Anime News Network's transliteration would be used in English dubbing, and Whis' name would probably derive from the same pattern of alcohol-based puns. I would, however, like to agree with PrinceZarbon in that "Birisu" is more true to the Japanese variant, so if you would prefer to avoid speculation, that may be the better option to use here.Zangetsu-jin's talk contribs stats 23:29, April 2, 2013 (UTC)

"Whis" or originally Uisu is play off the word "Whiskey", therefor the name Whis does appear to fit. However, it is "Bills" which does not coincide with either pun explanation of Birusu, being a play off the word "virus", or Beers... of course being a play off "Beer". Now, my biggest concern is that besides the aforementioned image of a 3DS cover shown above, and the fact that sites such as IMDB probably took the name from us, where does "Bills" come from? I firmly believe that we should try and stay as close to the original naming scheme as possible given that there are no official English names. That being said, calling the characters Birusu and Uisu (Whis is also fine with me, matches the pun) fits best.

If Whis is a play on whiskey, Beers seems more likely for an English fit than Birus. Sometimes a Japanese "R" becomes an English "L" when translated, so Bills or even Beels seem likely as well. In any case, it sounds like at this point we're just making predictions about what an English sub might use. If Plex is licensed, I would think that it takes priority as the only officially published source. For now. --

According to what I've read, Shueisha is saying that the name puns are alcohol-based, and that was apparently Toriyama's intent too. Based on this, I'd say we go with "Beers" and "Whis", at least until we get something else official in English (not sure who that would even come from. Funimation?)

We don't have official FUNimation names but we have two official spellings using our alphabet. The name should be either "Bills" or "Beers", those are how Japaneses write and see Bills' name written with our letters on official DBZ merchandise.

It might be worth noting that most fans and fan sites seem to know him by the name "Bills". That being said, Beers clearly seems to be the one more logically based on the pun. How about we go with Beers as the main article name and then note in the actual article that it could be Bills or that an official name hasn't been given yet? Those are just my two cents.

Oh but if Plex is official, then obviously we would use Bills.

The site's usual policy is to ignore our own reasoning and go with official sources, even when they don't make logical sense. In this case, that makes me lean toward Bills. --

Well it looks like we have 3 different names from conflicting sources, shouldn't we go with the Japanese name until we find out more information on it?

Yeah sorry, I didn't know if Plex was official, so My suggestion was based on the assumption that there were no official sources and we had to use our own reasoning based on those two pieces of evidence. But now that I think about it, even if Plex wasn't official it would probably make sense to use the only official source we have and use Birusu. After all, back when Wrath of The Dragon was being dubbed a lot of fans called Hirudegarn "Hildegarn" to make it sound more English.

The Dragon Ball: Battle Of Gods Cinema book (ie the theatrical program for the movie) appears to go with "Beers" and "Whis":

I was about to report this as well. "Beers" is the official spelling using our alphabet the most used and popularized now.

Who is the publisher of that cinema book? --

I just looked up the cinema book. A couple of sources seem to say that it's the "official cinema book" but it doesn't state a publisher. I'm not quite sure what to make of it yet, but it seems fairly legitimate.

Publisher is important, as fans make some pretty convincing stuff. --

In the oficial guidebook just wrote the japanese pronunciation.Date

Retrieved from "https://dragonball.fandom.com/wiki/Forum:Naming_conventions_for_%22Bills%22_and_%22Whis%22.?oldid=1174997"
Community content is available under CC-BY-SA unless otherwise noted.