In order for the technique to be effective the user must inflict damage upon their target.[1] The technique can be used from a distance, or can be used on an opponent by hitting them with physical blows.[2]

Forced Spirit Fission allows the user to separate and manipulate energy from their target, granting them the ability to do things such as undo Fusion or Absorption techniques and free trapped souls. This technique is also shown to be able to indirectly revive some of the dead.[2]

Since the principle revolves around splitting energy and then manipulating it further, it can be used in the opposite way. Rather than splitting-up spirit and sending it away Vegeta can instead concentrate it into one energy sphere and use it to revitalize any other being. This allowed Vegeta to gather the energy of many different fighters, very similar to the Spirit Bomb and similarly the people should be willing enough to contribute their energy in case it is their own much like during the formation of a Spirit Bomb.

Vegeta uses this technique to remove all of the energy that Moro had taken using Drain Life and to return it to its original source.[2] When asked about the ability by Piccolo, Vegeta notes that he could undo Piccolo's two previous Namekian fusions.[2]

Later during the climax battle against Earth-absorbed Moro, Vegeta punches the ground to deflate the ever growing Moro in order to give Goku an opening to shatter Moro's crystal. Moments later he utilizes the technique in the reverse way to gather energy from the assembled fighters and Uub to revitalize Goku helping him to deliver the final blow. 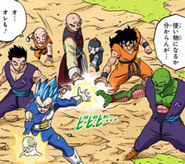