Find them Out! Deathmatch with a Furtive Attacker!

"Find them Out! Deathmatch with a Furtive Attacker!" (見極めろ！ 姿なきアタッカーとの死闘!!, Mikiwamero! Sugata naki atakkā to no shitō!!, lit. Find Him! Death Match with an Invisible Attacker!!) is the one hundred and sixth episode of Dragon Ball Super. This episode first aired on September 3, 2017. Its original American airdate was April 13, 2019. 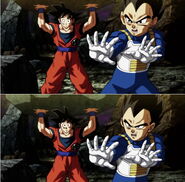 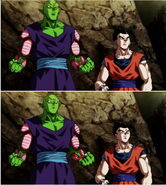 Retrieved from "https://dragonball.fandom.com/wiki/Find_them_Out!_Deathmatch_with_a_Furtive_Attacker!?oldid=1836493"
Community content is available under CC-BY-SA unless otherwise noted.