This article is about the technique. For the enemy in Attack of the Saiyans, see Fire Demon.

Manga: "A Wicked Soul Revealed"
Anime: "Heart of a Villain"

The user launches a large stream of fire from their mouth, bearing a large chance of hitting the opponent within range and dealing heavy damage.

Dabura used this technique against Super Saiyan 2 Gohan in the Babidi Saga.

In Dragon Ball Xenoverse 2 as part of the Extra Pack 1 DLC, Evil Flame appears as one of Dabura's Super Skills. It can also be obtained as a reward by the Future Warrior in Parallel Quest 117: "A Dance of Swords" where it is dropped randomly by Dabura when he is defeated.[2]

The Evil Flame from another point of view 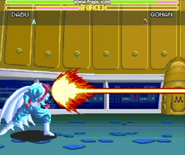 Evil Flame as Dabura uses it in Budokai Tenkaichi 3