Dr. Kochin (for his Bio-Warriors)
Dr. Myuu (for his Machine Mutants)

Electric Whips are electric weapons installed in Kishime by Dr. Kochin and a function of Mutchy's Devil's Whips.

Kishime makes two large whips appear on his arm. Then, they become electrically charged. When he is done powering them up, he wraps the target in the large whips, electrocuting them.

In Dragon Ball Z: The World's Strongest, Kishime uses his Electric Whips against Master Roshi, and later against Goku.

Mutchy uses his version of this, the Plasma Whip, in his battle against Goku. 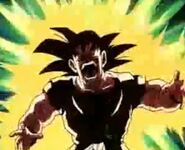 Kishime, with Electric Whips wrapped around his arms, teleports

Mutchy using Plasma Whip on his card Dragon Ball Heroes
Add a photo to this gallery
Retrieved from "https://dragonball.fandom.com/wiki/Electric_Whip?oldid=1847310"
Community content is available under CC-BY-SA unless otherwise noted.