It was authored by Akira Toriyama, and gives details on the characters and new forms in the movie. It also contained the movies' original script, which had some deviations from the final version.

Additionally, it contained an interview with Toriyama. In the interview he noted that as the author he found it easier to write for Dragon Ball films than a scriptwriter would, as he could freely mess around with things he had previously established. He also made reference to his preference of introducing characters in pairs.[1] 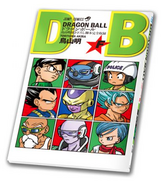