Start a Wiki
watch 00:32
Dragon Ball GT - Trailer
Do you like this video?

The series continues the adventures of Goku, who is turned back into a child by Emperor Pilaf accidentally wishing this using the Black Star Dragon Balls in the beginning of the series and is forced to travel across the galaxy to retrieve them. The first half of the series focuses on Goku, Pan, and Trunks, while the second half brings back most of the prominent characters from Dragon Ball and Dragon Ball Z. The series follows the Dragon Team against far more powerful foes such as the Luud Cult, the Machine Mutants, Baby, Super 17, and the Shadow Dragons.

The first two anime series were directly based off the Dragon Ball manga, which took much longer to produce than the anime did. This often resulted in "filler"; a notable instance being that the end of Goku's battle with Frieza lasts much longer than Frieza's predicted "five minutes". Since Dragon Ball GT was not based on the manga, no filler was required. As a result, four entire sagas (the Black Star Dragon Ball Saga, the Baby Saga, the Super 17 Saga, and the Shadow Dragon Saga) were completed in only 64 episodes. The music for Dragon Ball GT was composed and written by Akihito Tokunaga, replacing Shunsuke Kikuchi who is now retired after composing his last score for the final episode of Dragon Ball Z and the character designs for Dragon Ball GT were created by Katsuyoshi Nakatsuru.

Dragon Ball GT began on Fuji TV at 7:30 p.m. on Wednesday, February 7, 1996, exactly one week after the final episode of Dragon Ball Z. It ran for 64 episodes, the last of which aired on November 19, 1997. The series average rating was 14.6%, with its maximum being 19.7% (Episode 02) and its minimum being 9.6% (Episode 21). The series has also been aired across Japan by the anime television network, Animax, where it is currently being regularly broadcast. Unlike the Dragon Ball and Dragon Ball Z series, the creator Akira Toriyama had only minor involvement in the show's early stages, setting forth the initial premise of the series, as well as creating designs for most of the villains and main characters, including newcomer Giru. Early episodes are much more comedic in tone, reminiscent of early Dragon Ball. The later episodes, however, are action-packed and feature the same sort of dramatic tone that existed in Dragon Ball Z. Originally intended to span 40 episodes (ending after the Baby Saga), the series continued for another 24 episodes, ending after two years on the air. GT was followed by Dragon Ball Z Kai, a condensed remake of Dragon Ball Z, and Dragon Ball Super, which features a new plotline set directly after Dragon Ball Z, taking place between episodes 288 and 289 and began airing in the summer of 2015.

On June 15, 2005, Toei Animation (in conjunction with distributor Pony Canyon) released the entire series (including the Gokū Jr. TV special) in an extremely limited-edition DVD boxed set (called "Dragon Box GT"), along with a Dragon Radar remote control and an exclusive booklet. While the set features remastered audio and video, there are no subtitles, English or otherwise. It's also unavailable to the general public due to its scarce numbers and its huge cost.[1]

Akira Toriyama is credited as author in the ending credits of Dragon Ball GT; he oversaw the series' production, this was the same process that was used during the production of the anime series Dragon Ball and Dragon Ball Z. He came up with the name of the series, drew a rough design for the GT logo, he designed the GT appearance of the series main cast, and he designed the appearances of Giru and the Grand Tour Spaceship used in the Black Star Dragon Ball Saga.[2] He also drew at least three color pictures of Goku, Pan, and Trunks adventuring on various planets (Monmaasu, Rudeeze, and an area in Hell).[3]

Toriyama seems to have positive feelings towards his work's continuation. He refers to his fellow GT staff as "excellent", praising in particular the series animator, "animator Nakatsuru-kun is amazingly skilled, and mastered the peculiarities of my drawings". Toriyama has said that watching GT makes him happy, and that he enjoys it.[4] Toriyama drew a promotional version of Super Saiyan 4 Goku exclusively for the Dragon Box GT. Characters and events from GT have also been included in recent Dragon Ball video games.

Some fans do not consider GT to be an official installment of the series, most often citing that the series was not directly adapted from a Toriyama manga. Like Dragon Ball and Dragon Ball Z, GT contains minor elements inconsistent with prior anime events. However, GT has the fewest inconsistencies of the first three anime series, making it difficult to burden the few that exist as a reason for the series to be set aside as unofficial.

On the same Dragon Box that Toriyama illustrated the Super Saiyan 4 form, he refers to the series as "a grand side-story of the original Dragon Ball".[4] This controversial statement is interpreted by some fans to mean that the series is considered by Toriyama as an official continuation of his manga, and by others to mean the opposite. In December 2014, Funimation English voice actor and voice director Christopher Sabat said that GT is "not even canon anymore",[5] likely meaning that the release of Dragon Ball Z: Battle of Gods superseded GT as official content, in Sabat's opinion. Notably, Sabat's statement is one of very few recorded usages of the word "canon" by anyone involved in the production of any Dragon Ball media.

The English adaptation of Dragon Ball GT ran on Cartoon Network between November 7, 2003 and April 16, 2005, but the version by FUNimation had a major alteration: the first 16 episodes of the series, the "Black Star Dragon Ball Saga", were cut and replaced by a single US-only episode which summarized the episodes; this became the new series premiere and the rest of the episodes began with episode 17. This edit was implemented by the producers of the English dub to prevent viewers from possibly being put-off by these differently-toned early episodes. The 16 missing episodes have since been released as the "Lost Episodes".[6] When first aired, Funimation recorded a new musical score composed by Mark Menza and the openings and closings were replaced with something completely different from the original. For example, a rap was used for the opening and used different clips from the show to make up the visuals. However, when FUNimation released the series to two remastered boxed sets in 2008, the original Japanese music was restored, and English versions of the opening and all four closings were created, which are all very close to the original versions. From early 2012 until January 2015, the FUNimation version, including the "lost episodes", was shown on Nicktoons.

The "Anime Comics" manga version of Dragon Ball GT began in the January 2014 issue of Saikyō Jump, starting with the Evil Dragons Arc. Because the original story comes from an anime rather than a manga, this media is sometimes referred to as an animanga, a portmanteau of "anime" and "manga".

Presented in full color (as opposed to the limited-color version from serialization), Shueisha released the first three volumes of Dragon Ball GT in December 4, 2019, with pricing for ¥1,000 each (plus tax), and covered the entirety of the series' Evil Dragons arc. Previously, the Dragon Ball GT anime comic was exclusive to its Saikyō Jump serialization. 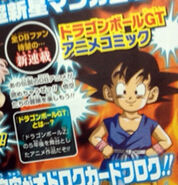 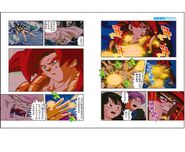 Due to the lack of Akira Toriyama's involvement and the plot inconsistencies, Dragon Ball GT never reached the same level of success as Dragon Ball Z in Japan (managing to get up to only 14% ratings compared to Dragon Ball Zs peak of 25% and dip to 13.5%). However in America Dragon Ball GT DVDs outsold Dragon Ball Z ones in 2003.[7]