​ Dr. Mashirito (マシリト, Dokutā Mashirito) is an evil scientist who is Senbei Norimaki's rival and the creator of Obotchaman. He is considered to be the main and most recurring antagonist of the Dr. Slump series.

Dr. Mashirito's name is an anagram of Kazuhiko Torishima's last name and is based on him.[1] According to Torishima in an interview with Forbes, the idea came from him viewing Mashirito's original design as being not intimidating enough and asking Akira Toriyama to think of the one person he hated the most; Toriyama appropriately took inspiration from the strict Torishima, much to the latter's exasperation.

Dr. Mashirito is a fairly short man with curly black hair (which is dark blue in the original Dr. Slump anime) worn in an afro style, narrow, beady eyes, a long nose, and what appears to be a chipped or missing tooth on the top-left corner of his mouth. He wears a white lab coat, a pink sweater, a red tie, and teal pants. Strangely, he also wears high heeled boots, presumably to make himself look taller and more menacing. After rebuilding himself as a cyborg, he wears two metal plates; one on his left eye, and the other on his chin, and his left hand is replaced with a metal crab-like claw. After being killed by Obotchaman's N'cha Cannon, Mashirito takes on the form of a ghost with a triangular paper burial cap, a white burial kimono, and a tail replacing his legs. In Dragon Ball Super, he maintains his appearance as a ghost, although his skin color has changed from flesh to blue-gray, and his kimono is replaced by the lab coat, sweater, and tie he wore when he was alive.

Dr. Mashirito is a brilliant, but ambitious, evil-minded, megalomaniacal, and unscrupulous evil genius who possesses intelligence equal, if not superior, to Senbei's. He is also very arrogant, egoistic, and hubristic, thinking highly of himself, and is not above transforming himself into a cyborg in order to accomplish his goals; he even claims that he would still conquer the world beyond the grave. He is also quite perverted, much like Senbei. In many of his appearances, he frequently says "rejected", a reference to earlier gags in the series featuring his namesake, Kazuhiko Torishima, frequently rejecting Toriyama's ideas and scripts.

Dr. Mashirito is a self-proclaimed genius scientist with aspirations of world domination. At an unknown point in the past, he became acquainted with Senbei Norimaki, and left an impression of being an "uber-pervert". At some point, he gives birth to a son called Dr. Mashirito Jr., who later goes on to create an evil counterpart of Arale Norimaki called Abale in the one-shot anime short Dr. Mashirito Abale-chan.

He makes a cameo in "The Biggest Bye'cha of All", and has the role of one of Cinderella's half-sisters in "Cinderella, the Musical". Dr. Mashirito is a contestant in the race organized in the "Penguin Gran Prix" chapters, using Caramel Man 002 as his vehicle.

After several more failed attempts to destroy Arale (including creating Caramel Man 004, who turned against him, befriending Arale and renaming himself Obotchaman), Mashirito begins to convert himself into a Cyborg, replacing more and more of his body with mechanical parts in an attempt to create

Dr. Mashirito dies in the final round of the "Who's the Strongest in the World?" tournament when Obotchaman steps into the fight disguised as Arale and uses an N'cha Cannon on him, reducing his full cyborg Caramel Man 009 body to nothing but a bolt. He makes an appearance as a ghost at the end of the series, witnessing the launching of Senbei's rocket and swearing that he will still take over the world one day.

Main article: "Future" Trunks Saga Mashirito returns from Hell as a ghost and attacks the "World Invention Award" ceremony out of anger for not being invited. By using Playtime X to manipulate Arale and Gatchan's childish desire to play with others, he is able to get them on his side. Trunks and Mr. Satan then attempt to fight Mashirito, but to no avail, as their attacks are unable to connect with Mashirito's ghostly body. Bulma uses the Reality Machine to create delicious food, summoning Beerus to Earth. Unaware of Beerus's power and identity, Mashirito insults Beerus and promptly gets destroyed as a result.[2]

The Brief Return of Dr. Slump

Dr. Mashirito returns in the sequel manga The Brief Return of Dr. Slump, inexplicably returned to life after his demise in the original manga, and appears without his cybernetic upgrades. He initially appears disguising himself as Akira Toriyama and hosting an event known as the "Penguin Village Game Grand Prix", but reveals himself and releases Caramel Man 010 to attack Penguin Village after Arale wins the event. Mashirito goes on to antagonize Arale and Senbei several more times throughout the rest of the manga.

In a chapter parodying the Super Sentai franchise, Mashirito appears as the main villain, facing off against Arale's team of "Ararangers". After his mech is destroyed by Arale, Mashirito perishes, and ends up in the Other World, where he is sentenced to Hell by King Yemma. As a result, Mashirito angrily demands that someone brings him back to life using the Dragon Balls. However, Mashirito appears alive an well throughout the rest of the manga, as the chapter in question takes place outside of the series' continuity.

This presumably takes place during the time period in which Dragon Ball GT occurs, given that Goku, Pan, and Trunks make an appearance in a different chapter in the Grand Tour Spaceship, though despite this, it appears that he and the other residents of Penguin Village have barely aged.

In the 1997 anime Doctor Slump, Mashirito's hairstyle has been changed, becoming longer and straighter. Later, he becomes robotic like in the original manga and anime, however, his left hand, which was replaced with a metal crab-like claw in the original version, appears no different from an ordinary hand in the remake. He also has the number "8" painted onto his chin, stating he is Caramel Man 008. In episode 60, Dr. Mashirito steals all the Dragon Balls from Goku using one of his robots. General Blue and Murasaki then end up stopping him and taking the balls for themselves.

Dr. Mashirito is the main antagonist of the Jump Super Stars one-shot meant to promote the game. In the one-shot, He uses an invention called the "Protagonist Tractor Beam" to lure protagonists of other series from Shonen Jump into the realm of Jump World with the intention of recruiting them to help him take it over. Upon bringing Sena Kobayakawa into the Jump World, his robot Caramel Man 010 gets destroyed by the combined effort of Bobobo-bo Bo-bobo, Goku, Monkey D. Luffy, and Naruto Uzumaki. Mashirito is then is revealed to have Mamori Anezaki, Sena's friend as a hostage. When the heroes came to make a move at Dr. Mashirito's Lab, he sends his next robot, Caramel Man 011, to avenge his previous one. While Caramel Man 011 is being defeated by the heroes, Sena dashes into the lab himself and Mashirito tries to assault him, but proves too slow for Sena's quick legs and accidentally falls out the window of his lair.

In Jump Ultimate Stars, Future Dr. Mashirito acts as the final boss alongside Caramel Man J. He allies with his past self, Frieza and Kid Buu.

After being defeated in the Penguin Village Wars, Dr. Mashirito fashions himself into what is called Caramel Man 004. This robotic form was quickly replaced with what would become his cyborg form, only appearing briefly twice. Ultimately, Obotchaman became Caramel Man 004 instead.

Over time, Mashirito alters himself with mechanical parts, becoming a cyborg.

Caramel Man 008 is destroyed after Senbei throws away a bomb disguised as a present that was meant for him. Dr. Mashirito converts himself into a drone body as a result.

The destruction of Caramel Man 009 resulted in his true death, as there was nothing left of his physical body.

After his death, Dr. Mashirito appeared as a ghost at the end of Dr. Slump, swearing he would take over the world. Mashirito appears in his ghost form in Dragon Ball Super, having escaped from Hell. In this form, he is immune to attacks by mortals and cannot be killed as he is already deceased. However he is still vulnerable to Beerus' Hakai as a God of Destruction is capable of destroying anything, including non-corporeal entities such as Ghosts or even souls and Beerus later used it to obliterate him from existence.

Dr. Mashirito is an antagonist in Famicom Jump: Hero Retsuden. He is a playable character and the main antagonist in the Nintendo DS game Jump Super Stars. Mashirito's main form of attack is by piloting Caramel Man 001, though in his idle animations he appears outsides of the mech. He can fuse with Piccolo for a tag attack, the resulting character using a yelling attack. This fusion is a reference to the fact that both characters were based on Akira Toriyama's first editor, Kazuhiko Torishima.

Dr. Mashirito returns in the sequel, Jump Ultimate Stars, where he also plans to take control of the Jump universe. A future version of him serves as the game's final boss and main antagonist, piloting a robot known as Caramel Man J. He also appears in Dr. Slump: Arale-chan on Nintendo DS. 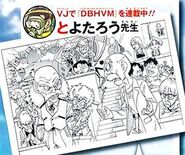