Despo FighterZ (スポファイター, Dīsupo Faitāzu), stylized as DeSpo FighterZ, is a spin-off manga adaptation of Dragon Ball FighterZ by Otoki Hiroshi. It was serialized by Saikyō Jump in a bimonthly basis and ran from August 3, 2018 to August 4, 2020, completing the spin-off manga with 13 chapters in total.

Despo FighterZ is a promotional manga of the Dragon Ball FighterZ video game which explains its features and game modes. The main characters are Kenzo (ケ ン ゾ ー, Kenzō), Shindo (シ ン ド ウ, Shindō) and Mamoru (マ モ ル, Mamoru). Following the official release of the long-awaited and popular video game Dragon Ball FighterZ, Kenzoh and many other teen fighting game experts and fans are entering the world of esports. They participate in the official FighterZ tournaments and competitions in search of being victorious against professional players and being better at the video game every day. 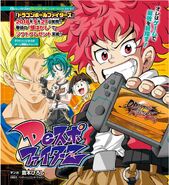