This article is about the Demon God's true form. For other "Dark Forms", see Dark Form.

The Demon God True Form[1] is a monstrous and powerful transformation.

Under Demigra's usage this form is referred to as his Final Form while under Shroom and Salsa's usage it is known as Dark Form.[2]

In this state, the user takes on a monstrous form, their clothes merging into their body and their hair growing down their back.

When utilized by Demigra in Dragon Ball Heroes the form appears much larger, being the same size as a Great Ape, the transformation into this state is called "Giant Demon God".

The user takes this form by using every ounce of his divine power - entering into this true form. In this form, the user's power and physical strength increase greatly. This form has several downsides depending on the user; in Demigra's case he become much slower than before while in Shroom and Salsa's case they will die as a result of using the form.

Demigra utilized this form to face the Future Warrior (and Goku in the game's normal ending) in the Demon God Demigra Saga of Dragon Ball Xenoverse, he has apparently used it in battle before, as he stated that nobody who had seen him use the form had lived to tell about it.

In the Dark King Mechikabura Saga, Shroom and Salsa are forced to use this form by Mechikabura when the duo are battling Xeno King Vegeta and Super Saiyan 4 Xeno Bardock, however the duo are still defeated and die from using the form. 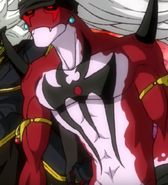 Shroom in his Dark Form 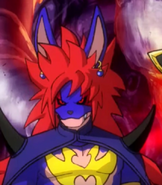 Salsa in his Dark Form