Death Of A Warrior

Death Of A Warrior (さようなら戦士たち, Sayōnara Senshitachi, lit. "Goodbye, Warriors") is the thirty-fifth volume of the original Dragon Ball manga series. It is released in North America as Dragon Ball Z volume nineteen, with the chapter count restarting back to one. It shows the last part of the Cell Games Saga. 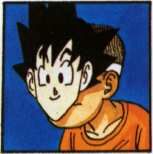 The Cover Flap image, featuring Akira Toriyama with a Goku mask
Add a photo to this gallery

Retrieved from "https://dragonball.fandom.com/wiki/Death_Of_A_Warrior?oldid=1945241"
Community content is available under CC-BY-SA unless otherwise noted.