Death Fork is a rush attack used by Frieza in his second form.

Frieza charges at the opponent to impale them in the chest with one of his horns. Next, he shifts his head up and down, further injuring the opponent and causing more blood to leak out of them. Finally, Frieza throws the opponent off his horn down to the ground.

Frieza uses this attack during his battle against Gohan, Krillin and Vegeta on Namek. After blasting everyone away with a huge shockwave blast, Frieza takes a moment to decide who should die first, and then flies up and attempts to impale Dende, who is being carried by Krillin. Although Krillin throws Dende out of the way, Frieza attacks Krillin with the Death Fork and throws him, bringing him to near death and throwing him down deep into the sea. While Gohan then furiously attacks Frieza, Dende rushes to retrieve and heals Krillin back to health, who then attacks Frieza with a Destructo Disk.

Frieza flies towards Krillin to use the attack

Death Fork as part of HAIL Frieza in Budokai Tenkaichi 3

Death Fork as part of HAIL Frieza in Raging Blast 2

Death Fork as part of HAIL Frieza in Ultimate Tenkaichi 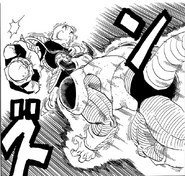 Death Fork in the manga
Add a photo to this gallery
Retrieved from "https://dragonball.fandom.com/wiki/Death_Fork?oldid=1359303"
Community content is available under CC-BY-SA unless otherwise noted.