Manga: "A Wicked Soul Revealed"
Anime: "Heart of a Villain"

The Darkness Sword (ダークネスソード, Dākunesu Sōdo) is a sword wielded by Dabura. The sword is very similar in appearance to a Chinese dadao, but has a distinctive hook on the back of the blade.

The Darkness Sword is seen when Dabura uses his Darkness Sword Attack on Gohan, and later against Majin Buu, where it does not do any damage. Dabura makes his sword appear using Magic Materialization.

In Dragon Ball Z: Supersonic Warriors 2, Dabura uses his sword as part of his team attack with Super Buu, the Dark Sword Slash.

In Dragon Ball Fusions, the Darkness Sword is utilized by Dabura's EX-Fusions Demon King Daccolo and Damira. However its use is censored in the English localization as all swords in the localization are replaced with wooden swords. 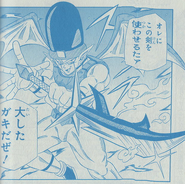 Dabura is angered after his deadly sword is shattered