Dark Evolution is a type of transformation that a Demon God with high magic power can force upon a chosen target.

A Demon God is capable of causing a warrior to undergo a dark evolution by adding their Demon God power with their target's "kiri", a soul's energy.

Putine invented the method of forcing this evolution. In the case of Cell, the Bio-Android was transformed into his Cell-X form.

Mechikabura transformed King Vegeta into the personification of his magic power, causing King Vegeta to undergo a dark evolution into a form that turns his hair black with one red spike and gives him red and black eyes.

Towa studied Putine's technique to control the darkness. Towa used this to cause Lord Slug underwent a dark evolution into a Dark Super Giant form and merged with the Earth. 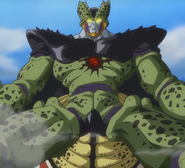 Cell-X with a Dark Dragon Ball 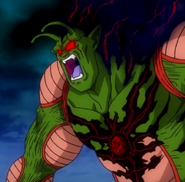 King Vegeta as the personification of Mechikabura's magic power
Add a photo to this gallery
Retrieved from "https://dragonball.fandom.com/wiki/Dark_Evolution?oldid=1717968"
Community content is available under CC-BY-SA unless otherwise noted.