The Core Area Warriors[1] are a collection of individuals whose goal is to destroy Zeno.

They come from different eras and universes, and were gathered by Fu with the intention to eventually release them to increase the excitement on the Prison Planet.[2]

In an extra chapter of the manga it is revealed that the Core Area Warriors agreed to partake in Fu's experiment so that the Universe Seed could be filled with energy.

One of the Core Area Warriors, Cumber, breaks out of the Core Area early due to his hunger for battle, he faces off against the gathered members of the Dragon Team and Time Patrol before eventually being defeated. In the anime, Fu notes that the energy gathered on the Prison Planet means soon "they" will be revived. As the Prison Planet is about to explode the group appear to collect Cumber.

In the anime, Oren and Kamin attack Universe 6, taking down Hit, Cabba, Kale and Caulifla as they do so, leading to Vegeta and Future Trunks having to come to their rescue. During the fight with the Saiyan warriors from Universe 7 they are pushed back and reveling in how much fun they are having, enter the wounds of Kale and Caulifla to continue the battle though leave their hosts when Trunks and Hit set up a trap for them that would lead them to being hit by Vegeta's Final Flash.

In the manga, after being freed from their possession Caulifla and Kale battle Oren and Kamin, merging into Super Saiyan Kefla to take on the duo. Meanwhile at another location, Hit faces Fused Zamasu and is critically wounded by him after Hearts arrives.

In the anime, when the leader of the group, Hearts, arrives he shows his dominance over his enemies and states that using the Universe Seed he will take down Zeno, the Gods of Destruction and the Supreme Kai. Upon reading Hit's mind he determines that Jiren is the strongest mortal and heads to Universe 11 where his comrade Cumber is already facing him after already having taken down Top. Hearts interrupts the battle between Jiren and Cumber by sending his ally ahead to Universe 3 and Zamasu takes over the battle with Jiren.

Vegeta and Trunks chase after the group to Universe 11 only for Oren to take possession of Vegeta's body. When Goku unexpectedly shows up he uses the power of his Ultra Instinct Sign to separate Oren from Vegeta. Oren and Kamin merge together to become Kamioren to battle against Goku though Vegeta takes over for him wanting revenge for being controlled. Hearts meanwhile summons Rags to assist him in taking down Goku.

Eventually Vegeta defeats Kamioren using his Super Saiyan God SS Evolved form and Hearts sends Rags along to assist Cumber in Universe 3. Hearts once again overpowers the Dragon Team before they are saved by Shin who along with Goku teleports everyone away. Content with the energy that was gathered in Universe 11, four of the Core Area Warriors next head to Universe 7 where they battle against the Dragon Team in the skies above the city. Meanwhile in Universe 3, Rags finds herself defeated by Fu's modified Cooler. Cumber engages him in battle but he too is defeated after Cooler uses his Golden transformation.

In the manga, Rags and Kamin are sent to Universe 3 to obtain the Universal Release Device, with Rags easily defeating their opposition.

Top and Dyspo are defending against the attack of Super Saiyan 3 Cumber in Universe 11. The situation appears dire as Hearts, Fused Zamasu and Oren arrive, though Vegeta and Future Trunks arrive soon after and the fighting continues. The Core Area Warriors begin to gain an advantage with Oren taking over Vegeta, however Goku arrives and using Ultra Instinct Sign begins to battle the Core Area Warriors, he is shocked out of the form by the possessed Vegeta, only for Vegeta to break free. Rags and Kamin arrive to supply Hearts with the device they obtained from Universe 3.

Kamin forcefully fuses with Oren into Kamioren and has a brief fight with Vegeta, though it ends as Vegeta and Goku chase Hearts to Universe 7. Things begin to heat up as Top enters God of Destruction Mode and Cumber powers up into his full power Super Saiyan 3 form. The two continue to clash until Kamioren - who has used some of the power of the Universe Seed - arrives in their ultimate form and takes down both warriors with a single blow. However before Kamioren can finish off Top, Jiren arrives and easily defeats the behemoth - defusing them, Dyspo then prepares to take them away to be imprisoned. The barely conscious Cumber attempts to fight Jiren, only to be teleported away by Fu so that he can be used to test Meta-Cooler's power. Thanks to his injuries Cumber is quickly defeated by Golden Meta-Cooler and left unconscious. Meanwhile Fused Zamasu attempts to betray Hearts and steal the Universe Seed for himself however Rags appears and encases him in glass with Future Trunks showing up and slicing him in half.

In the anime, back in Universe 7, Hearts finally fights Goku seriously and appears to win. At the same time Kamioren who is now in a losing battle against Android 17 and Piccolo is given the Universe Seed to merge with which causes them to grow to giant size. As the other Dragon Team members are quickly overpowered, Goku returns in his Autonomous Ultra Instinct Sign form once again to confront them. Goku eventually defeats and destroys Kamioren using his completed Autonomous Ultra Instinct form. Hearts receives the completed Universe Seed from Kamioren's remains and begins to merge with it himself. Zamasu watches with interest, saying he had been waiting for this moment.

As Jiren and Hit arrive to aid in the elimination of the remaining Core Area Warriors, Fused Zamasu defends Hearts long enough for him to complete his transformation, however his "reward" is to be destroyed completely by the now transformed Hearts. Hearts goes on to battle the combined forces of Goku, Vegeta, Future Trunks, Piccolo, Android 17, Hit and Jiren and manages to quickly overwhelm them. Seeing no choice, Goku and Vegeta opt to fuse into Gogeta.

Gogeta gains the advantage over Hearts in battle, causing him to summon a powerful God Meteor as a last resort. However with assistance from Hit and Jiren, the trio are able to destroy the meteor and Gogeta goes on to destroy the Universe Seed which begins to cause Hearts to dissipate. Hearts tells Gogeta that the Zeno are capable of destroying Universes on a whim and only wanted to free everyone from that threat. However seeing the mortals continue to surpass their limits, he voices his adoration for them just as he fades away.

In the manga, on Earth in Universe 7, Hearts overwhelms Goku and Vegeta in their Super Saiyan Blue forms after transforming into Super Hearts. Jiren and Hit arrive to repay the Saiyans for their help earlier on but Rags soon appears and gives Hearts the universe seed allowing him to transform. As Piccolo and Android 17 head over to help, Rags intervenes but the two are able to find a way to defeat her. Not long afterward, Majin Ozotto appears and dissolves Rags into a cloud of black smoke to gain her abilities to manipulate and control glass. Back at the main battlefield, Hit and Jiren are able to buy Goku and Vegeta the time they need to fuse into Gogeta who then successfully destroys the God Meteor and kills Hearts with a single powerful Kamehameha with their friends and family destroying the meteors fragments before they crash land on the planet.

Main article: Universe Creation Saga Hearts is freed by Demigra from his prison in Hell. Hearts proceeds to head to the machine Cumber is hooked up inside, with the Saiyan noticing his presence.

Hearts and Cumber are warped to the Pseudo Universe, Hearts joining forces with Goku to take on Frieza and Meta-Cooler and Cumber facing Turles and Vegeta in a three-way showdown. After Cumber is pacified, he is collected by Hearts to assist with stopping the plans of Fu and the Crimson-Masked Saiyan.

After banishing Broly through a space-time portal during his battle with Cumber, Hearts reveals to Cumber that he is vital to his plans due to being a "god slayer". The two then encounter a Warrior in Black, who invites them to participate in something.

Hearts and Cumber appear as members of Team 5 during Aeos' Super Space-Time Tournament, along with Frieza, Metal Cooler, Turles, Dr. Wheelo, and Super 17.

Upon being released, the Core Area Warriors obtained the Universe Seed that Fu had been preparing.

Rags and later Kamin traveled to Universe 3 in order to use their technology to build the Universal Release Device.

The Core Area Warriors are the main antagonists of Super Dragon Ball Heroes' Universal Conflict Saga. After the events in Universe 11, they travel to Universe 3, where they ally with Paparoni - who aids them by building the device they need, as well as brainwashing Agnilasa and Catopesra to fight for them. 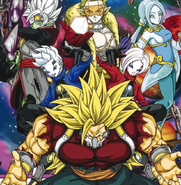