Emperor
Leader of the Frieza Force

Celluza has two black sects on his head with a spotted purple ball between the sects, a black tail, black arms up to his wrists, and the Metamo-Ring on his left arm. He has a single black spot on his chest and black plates on his legs. He has spotted Purple Bio-Armor that covers most of his body except his hands, face, and neck.

Much like both of his fusees, Celluza has a heart of evil as well as a dangerously polite demeanor. He inherits Cell’s enjoyment for battle (treating it as a game more than anything) as well as Frieza’s unquenchable thirst for vengeance.

After Frieza and Cell's failure through Ultra Fusion, the two fuse into Celluza as a last resort. However, Tekka and Pinich fuse together as well, after becoming a Super Saiyan they finally managed to defeat them in a final battle.

It is unknown how strong Celluza is, though he managed to keep up with the EX-Fusion of Tekka and Pinich for an extended period of time before being defeated. It is possible that Celluza is as strong as, or stronger than Golden Frieza (from the time of Dragon Ball Z: Resurrection ‘F’), as Frieza chose to fuse with Cell into Celluza instead of using his Golden Frieza form in the final battle. 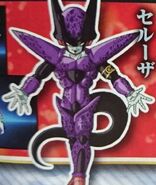 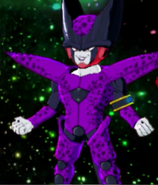 Celluza in the final battle