This article is about the faction of Saiyan criminals lead by Caulifla. For minor members of the gang, see List of tertiary characters#Caulifla's Gang Members.

Age 780 (temporarily as a result of the erasure of Universe 6; reactivated upon revival by Super Shenron)

Caulifla's Fang is a band of Universe 6 Saiyan criminals lead by Caulifla.

Caulifla leads a gang of Saiyan criminals of which the mutant Legendary Saiyan Kale is a member.

While the gang itself appears in both the anime and manga, it is depicted differently with the only consistent aspects being its leadership and Kale's status as a member.

In the manga, the gang is predominantly female as Caulifla, Kale, and the two other members shown are all female Saiyans. Additionally in the manga, they are shown robbing a transport containing food and jewels for King Sadala, though they end up giving the food to poor children indicating that they are noble thieves. Additionally the Sadala Defense Force tends to stay out of the gang's territory presumably due to Caulifla's power (and possibly Kale's though she tends to hide how strong she really is).

In the anime, the only female gang members shown are Kale and Caulifla herself, with the rest being male Saiyan thugs who Cabba defeats using his Super Saiyan form. Additionally the transport robbery scene is absent, so save for Caulifla and Kale, there is no indication in the anime that the other gang members are anything more than Saiyan street thugs who follow Caulifla due to her power. The anime also implies that personality wise the other gang members are implied to behave in a manner similar to the Saiyans of Universe 7.

Due to Team Universe 6 being eliminated from the Tournament of Power, Caulifla, Kale, and the members of the gang on Planet Sadala were erased as per the tournament rules. Fortunately, Vegeta had promised Cabba that he would wish for Universe 6 to be restored if Team Universe 7 won the tournament, and though he was ultimately eliminated, his teammate Android 17 who was of a similar mindset, wished for all the erased universes to be restored (in the anime this was the Omni-Kings plan all along as the tournament reward of the Super Dragon Balls was actually a test for the surviving Universe).

In Dragon Ball Legends, Caulifla ends up recruiting two Combatants she and Shallot defeat to assist them in their search for Kale. Additionally, Super Saiyan 2 Caulifla & Kale (Assist) appears with SSJ2 Caulifla acting as the main playable character while Super Saiyan 2 Kale acting as an assist character who fights alongside her when using certain Arts.

As part of the Legendary Pack 2 DLC, Caulifla (Super Saiyan 2) and Kale (Super Saiyan 2) are added as playable DLC characters Dragon Ball Xenoverse 2. Additionally during an Ultimate Finish in New Parallel Quest: "Learning About Fusion", Caulifla will appear with Majin Buu to spar with the Time Patrol, Kale, and a confused Ultimate Gohan after they defeat Kid Buu. Caulifla explains she encountered him earlier and defeated him, effectively recruiting him to her team after hearing how he wanted to get stronger for some guy named Hercule (due to being from Universe 6, Caulifla had never heard of Hercule before meeting Buu). Caulifla ignores Gohan's assertion that Buu is dangerous (as he is more familiar Good Buu's Innocent Buu incarnation and is unaware of his friendship with Hercule) lets Majin Buu join in on the "fun" forcing the Time Patrol to defeat both her and Buu. If they are successful (as being defeated during a Ultimate Finish still counts as clearing the quest), Caulifla tells Kale to come with her so they can train thus she will have to learn about Metamoran Fusion (the original reason Vados sent her to Earth during the Majin Buu conflict with Caulifla following her) with Good Buu's fate left ambiguous. 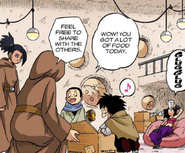 Caulifla with an unnamed male gang member in the anime