Captain Bacterian (キャプテン・バクテリアン, Kyaputen Bakuterian) is an obese and filthy pirate captain who wreaks havoc and collects treasure. He appears in Dragon Ball Online as an antagonist.

While sharing the same name and appearance as the fighter Bacterian, the relation between the two is unknown. He is a very large obese man with dark skin, long unkempt black hair, a bushy black beard, and a hairy chest and forearms. He wears a crown and a golden belt that has a skull with the Majin symbol depicted on it. He is usually seen with saliva running from his mouth or with mucus running from his nose. Most of Captain Bacterian's teeth are missing, most likely rotted away from tooth decay, due to him never brushing his teeth, and his remaining teeth are stained yellow from plaque.

Main article: Dragon Ball Online Captain Bacterian is a pirate captain active on Papaya Island in Age 1000 and is allied with the Time Breakers and Captain Taylor. Towa gives him the mission of collecting energy on Papaya Island to ensure Cell-X's growth. However, Cell-X eventually grows impatient of waiting, and leaves Captain Bacterian's hideout, taking up residence in a nearby cavern. 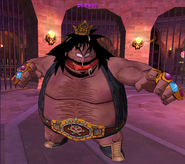 Retrieved from "https://dragonball.fandom.com/wiki/Captain_Bacterian?oldid=1947083"
Community content is available under CC-BY-SA unless otherwise noted.