Bonyu (ボニュー, Bonyū) was a former Ginyu Force member who appears in a short sub-quest[1] in the video game Dragon Ball Z: Kakarot.

During the training period during in anticipation for the arrival of the Androids, Bulma and the Female Researcher obtained the data when doing research on the pod. At the request of Bulma, the Female Researcher tells Goku of this discovery and that the battle data is incomplete and will need tested several times. Goku fights the Virtual Fighting Data construct of Bonyu and manages to defeat her. 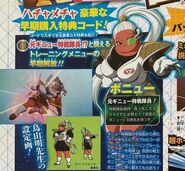 Retrieved from "https://dragonball.fandom.com/wiki/Bonyu?oldid=1882960"
Community content is available under CC-BY-SA unless otherwise noted.