Bongo is the Poko Land Dragon, a type of demonic dragon summonable by Poko Priests

Moog is one of the three guardians of Gamelan's throne room. 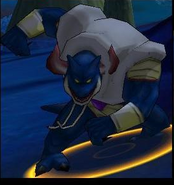