Manga: "The Five Champions"
Anime: "We Are the Five Warriors"

Biting is a physical attack used several times in the Dragon Ball series.

Fangs the Vampire bites into Krillin's head during the Fortuneteller Baba Saga, nearly draining him of his blood in the process.[1]

In Dragon Ball Super, Goku bit the tails of Beerus and Golden Frieza while fighting them. He bites Whis during a sparring session.

In Dragon Ball GT, Goku bites Baby Vegeta in their first confrontation. Later on, Goku also bites a rock in pain while Old Kai is trying to pull out his tail. 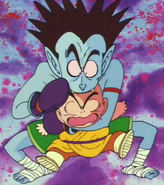 Goku biting a rock.
Add a photo to this gallery

Retrieved from "https://dragonball.fandom.com/wiki/Biting?oldid=1877653"
Community content is available under CC-BY-SA unless otherwise noted.