Battle in the Red Zone!!

A Fight in the Red Zone!

Battle in the Red Zone!! (レッドゾーンの闘い！, Reddo Zōn no Tatakai!; lit. "A Fight in the Red Zone!") is the 231st chapter of the Dragon Ball manga. The chapter's anime counterpart is the first half of the episode "Saiyan Sized Secret".

The cover of this chapter shows an injured Goku.

Vegeta is shown to be angered at the fact that Goku's power has surpassed his own. Having enough of it, Vegeta decides to destroy Earth with his Galick Gun attack. However, Goku manages to counter the blast with a Kaio-ken Kamehameha and overpowers Vegeta, seemingly defeating the Saiyan prince. 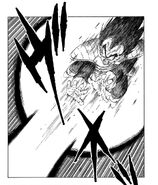 Goku victorious...
Add a photo to this gallery
Retrieved from "https://dragonball.fandom.com/wiki/Battle_in_the_Red_Zone!!?oldid=1208827"
Community content is available under CC-BY-SA unless otherwise noted.