Barry Kahn (バリー・カーン, Barī Kān) is a young A-list actor and an extremely popular celebrity on Earth during the Majin Buu Saga. He plays Great Saiyaman in the film Great Saiyaman vs. Mr. Satan in Dragon Ball Super.

Barry is a male Earthling with blonde hair and blue eyes.

Barry shows a vain and narcissistic personality, caring only about himself. He also shows a sadistic side, wanting his stunt double to take a new, extremely dangerous stunt at a whim, and being angered when Gohan replaces the original stuntman, and effortlessly completes the stunt. He also excitedly forces Cocoa Amaguri to blackmail Gohan into leaving the film, gleeful about how he could easily destroy Cocoa's idol career at the same time as he planned to make it appear they were having an affair to turn Videl, Mr. Satan, and the public against Gohan which would in turn destroy Cocoa's career due to her being perceived as a homewrecker. It is also implied that he is a psychopath, as he generally relies on his charm to get what he wants and is a prolific liar, as well as harboring absolutely no remorse for any misdeeds. Overall, deep down, he is evil. This is especially evident when he was possessed by the evil-amplifying parasitic criminal Watagash, where he managed to completely overpower Base-form Gohan, thus forcing the latter (while still acting as The Great Saiyaman) to go Super Saiyan to stop him.

It is also implied that he seeks to woo Videl away from Gohan by ruining his marriage through evidence of scandalous affair so he can enjoy the fame that would come to being in a relationship with the daughter of Mr. Satan, though Videl was not fooled and had faith that Gohan would never cheat on her, calling Barry "pathetic". Ironically Barry himself was forced to keep quiet about Gohan's secret identity to preserve his own career and reputation when Cocoa threatened to reveal his identity as the monster who fought Great Saiyaman, showing that he values his reputation and career over spiteful revenge.

Additionally while Barry was possessed by Watagash, he did avoid hurting bystanders, indicating he may have retained some sense of humanity despite his selfishness, evil personality, and literally turning into a monster.

Main article: Majin Buu Saga Barry Kahn is shown in the magazine from a young lady that Majin Buu meets while on a killing spree. Majin Buu morphs his face into the face of this "Super Star" to impress and make the girl kiss him, but he fails to do so, only terrorizing her. He is an A-list actor. It is unclear how he died during the Majin Buu Conflict though he was presumably killed either during Innocent Buu's rampage, Super Buu's Human Extinction Attack, or when Kid Buu destroyed the Earth. He was later revived along with the rest of Earth's population by Porunga and continued his acting career.

Barry was cast to play Great Saiyaman and gets jealous of Gohan being married to Videl and gaining all the attention as his stunt double in the movie. In an attempt to ruin Gohan's reputation and marriage, Barry blackmailed popular idol and co-star Cocoa Amaguri into setting up a private rehearsal with Gohan in her room in order to create false evidence of an affair, though unbeknownst to Cocoa, he sadistically planned to ruin her acting and music career through the resulting scandal. However, Cocoa (who had discovered Gohan was the real Great Saiyaman and developed a crush on him) could not go through with it and attempted to thwart Barry by changing the rehearsal location. Unfortunately, Barry followed them and discovered Gohan's secret identity and unfortunately Cocoa made the mistake of innocently kissing Gohan on the lips as an innocent gesture thanking him for his kindness and words of encouragement which played right into Barry's hands. Barry then used pictures of the kiss to convince Videl her husband had been unfaithful while acting concerned in an attempt to woo her. However, she is not so easily fooled, seeing through Barry's acting as she knows that such behavior is out-of-character for her pure-hearted husband. Videl states he is pathetic and forces him to leave. Barry, however, swears he will reveal Great Saiyaman's true identity.

However, he is possessed by the space criminal Watagash while on set for the Great Saiyaman vs. Mr Satan movie and his evil nature allows Watagash to increase Barry's power allowing both the space criminal and Barry to take revenge on Gohan. Barry kidnaps Pan to draw Gohan out though Gohan fights him as Great Saiyaman to save his daughter. Feeding off Barry's evil nature and hatred of Gohan, Watagash allows him to transform into three stronger forms each more monstrous than the last. He tries to kill Great Saiyaman, although Gohan defeats him by transforming into Super Great Saiyaman and ultimately defeats Watagash, freeing Barry from the possession. Cocoa then makes sure Barry's blackmail will never happen, by threatening to expose that he was the monster Gohan fought, forcing him to keep that knowledge to himself to protect his own reputation and career.

Main article: Dragon Ball Online In Dragon Ball Online, it is shown that Barry Kahn has a descendant named Sora Kahn who follows in his ancestor's footsteps by becoming an actor himself. There is a billboard featuring him promoting one of his films, For Whom the Hair Grows.

Main article: Great Saiyaman Suit While playing the role of Great Saiyaman, Barry unknowingly wears an authentic Great Saiyaman Suit as the original suit's inventor Bulma had supplied the suits used in the film via the Capsule Corporation. However, it is unclear if his suit has functional Great Saiyaman Watch or if the one he wears is just a prop (as it's likely Bulma would keep that feature exclusive to Gohan's suit to protect his secret identity). However, Barry does later learn that Gohan is Great Saiyaman, though fortunately the situation with Watagash forces him to keep quiet to prevent Cocoa from outing him as the monster who fought Great Saiyaman. Barry continued to use the suit for the remainder of filming the movie and promotional appearances relating to the film's release.

Barry Kahn is infected by Watagash and is powered up by his hatred of Gohan. In this form he becomes more muscular, has red eyes and he gains the cotton ball. Similar to other people infected by Watagash, Barry Kahn's shoulder blades were also shown to possess small spines.

A form taken on by the infected Barry Kahn during his battle with Gohan, in this state his head changes shape, he grows larger, and he gains blue hair over most of his body. His power is comparable to base Gohan's in this form.

The final form took on by the Watagash-infected Barry Kahn, in this form, he becomes a huge monster bearing no resemblance to Barry's normal form, his body becomes blue, he gains horns on his head and he possesses huge red eyes. In this form, he is capable of easily taking down base Gohan, but is in turn easily defeated by the Super Saiyan Gohan's Super Great Saiyaman Beam. 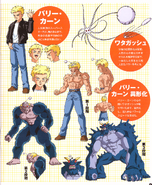 Barry's various forms after merging with Watagash by Tadayoshi Yamamuro