Sorbet aims one of his ring Ray Guns and uses it to shoot a small ball of energy at the opponent, causing either a piercing beam of energy, or an explosion.

Sorbet first used the ring to blast Shu and Mai's weapons out of their hands when they tried to attack him, showing he possesses great marksmanship with it. In Dragon Ball Super, Sorbet did not use the Bad Ring Laser until Goku reverted to his base form and let his guard down.

Bad Ring Laser was named in Dragon Ball Heroes. Golden Frieza can also use the attack in Dragon Ball: Zenkai Battle, where he causes it to be fired from elsewhere to surprise attack the foe, Golden Frieza's version is much larger than Sorbet's.

In Dragon Ball FighterZ it appears under the name Sorbet's Ray Gun and serves as Sorbet's only in-game appearance (minus the Lobby avatars). It a Special Move that appears as part of Frieza's Golden Frieza Meteor Attack transformation which can be performed after the Golden Frieza form expires. When Frieza staggers after his Golden Frieza time runs out, Frieza can expend another bar of ki to have Sorbet fire a ring from off-screen while Frieza himself gets back up. 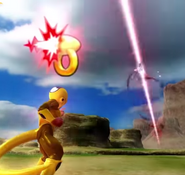 Retrieved from "https://dragonball.fandom.com/wiki/Bad_Ring_Laser?oldid=1916985"
Community content is available under CC-BY-SA unless otherwise noted.