An Enemy in Common

An Enemy in Common

A Powerful Enemy in Common

The cover shows a close up of Raditz with Goku and Piccolo shown behind him. This version of the title page is included in the Vizbig release.

Raditz repeats his request to Goku to kill a hundred Earthlings, and if he doesn’t, he’ll kill his son. Goku can barely move, and Kuririn calls Raditz a coward. Raditz says this planet is the next target and reiterates about the hundred humans, but Goku weakly asks him to return his kid again. Unbeknownst to everyone Piccolo is watching on, pissed, from the back of the house. Then Raditz takes off, saying tomorrow will be fun, as Gohan cries for his father, and Goku lies on the beach unable to do anything.

Goku curses the situation, then calls for Kinto-Un. But Kuririn and Kame-Sen’nin object, asking if he really thinks he can win. Goku weakly stands and says that guy’s tail is his weak point; he will lose all his strength. But, Goku doesn’t think he can do it alone. Kuririn and Kame-Sen’nin volunteer to fight, but Goku says that God told him Shenlong can’t grant the same wish twice. In other words, if they die again, they’ll stay dead. Goku asks if they’ll help anyway, and they agree to. Kuririn thinks to himself how he’d wanted to get married. Bulma then suggests they use the Dragon Balls to get rid of Raditz, but Kame-Sen’nin doubts they could gather all of them in one day. Then Goku asks Bulma if she has the Dragon Radar, and she remembers that Gohan had a Dragon Ball on his hat as she gets it out. Raditz is moving at incredible speed, until he finally stops. Thankfully, he didn’t go back out into outer space. They prepare to head off, when Piccolo shows himself.

Goku asks what he’s doing here, as Bulma crawls away in horror. Piccolo explains that he’s already met that guy, and that those two (Kuririn and Kame-Sen’nin) are no good. The way to beat him is for the two of them to team up — Son Goku and Piccolo Daimaō. Goku asks Piccolo if he’s suddenly had a change of heart, but Piccolo explains that this guy is in the way of his plans for world domination. So, they agree to work together, for now. Goku asks Bulma for the Dragon Radar, then he hops on Kinto-Un and asks Piccolo if he’ll be able to keep up. Then the two of them zoom off, and Kame-Sen’nin thinks those two just might be able to win. He asks Bulma if she remembers the location the radar had put out, so they can go as well. 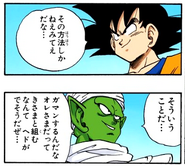 Piccolo and Goku team up

Goku going to save Gohan