Alvin Sanders (born in Oakland, California) is an American actor and voice actor now residing in Vancouver, Canada. He currently sits on the Union of BC Performers' executive board.

Some of his other roles include Demolisher in Transformers: Armada and Energon, Puppetmaster in Fantastic Four, Alien in The SoulTaker, and King Sombra in the final season of My Little Pony: Friendship is Magic. 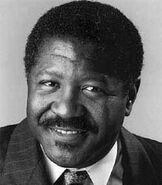