​Ahms (アムズ, Amuzu)[1] is an artificial lifeform with an AI, created by Sealas.[2]

Ahms is a loyal follower of Sealas who follows his orders without question. Similar to the Android Seven-Three, he shows very little personality or free will.

Even before he absorbed 100% Full Power Frieza and Super Perfect Cell, Ahms was very powerful. With one energy blast he destroyed a mountain far out in the distance. Trunks commented that it was so fast he couldn't react, while Note commented that if that had hit her, Trunks, and the rest of the Dragon Ball Heroes would have all been vaporised. Also Sealas commented that his accuracy needed work, though the intensity couldn't be changed. Sealas also commented that in time he will learn to strike a balance between the accuracy and intensity of his attacks, as Sealas also stated Ahms could integrate combat data into his programming and eventually will be the strongest fighting force in existence.

After Frieza and Cell had fought at full power, Sealas states that their combat data is ripe for the picking, as Ahms begins to absorb 100% Full Power Frieza and Super Perfect Cell. Sealas then states that by assimilating both their data and physical bodies he could power up his AI counterpart. After that Trunks added he also has the data from the last fight and that 100% Full Power Frieza and Super Perfect Cell's Ki were combining to form something much more powerful. Sealas then has himself and Ahms fight the Dragon Ball Heroes, of which midway through he comments the data yield will be superb. After the fight, Trunks comments that Ahms is too much.

When Xeno Goku and Xeno Vegeta arrive, Sealas comments that this would provide him with more delectable data. After the fight Sealas says they will pick up the fight next time because Ahms has ample data for now. When Goku and Vegeta fire a Ki blast to stop them from running, Ahms blocks it without taking a guarding stance, with Goku commenting he was holding back the entire time.

Later on in the game, when Sealas and Ahms confront the Dragon Ball Heroes, Android 18, Android 17, Hit, and Goku Black, Sealas comments that he's fully aware of how limited his power is and that was precisely why he had created Ahms to serve as the brawns to his brains. After a fight with them Sealas says their teamwork should be commended, but it still fell short of his AI Lifeform aka Ahms. Android 17 commented that he hates to admit it, but Ahms had them beat. Xeno Goku commented that Ahms is way stronger than when they fought him before. Sealas then confirms this by saying the results are not bad as a response to Xeno Goku and that Ahms seemed to have been more precise in his power usage this time. It should be noted that when Goku Black was absorbed, Ahms’s appearance did not change. It was commented by Trunks that Ahms is going to power up.

Ahms then absorbs Hit, and his appearance changes to look like Hit with Goku Black's Rose hair. Sealas then says that both Goku Black and Hit had gained a rather large amount of power, that in turn had proven immensely beneficial to Ahms. Android 18 comments that its Ki has gone through the roof. Xeno Goku comments that Ahms combined the Ki of the two it had absorbed and now Ahms is super powerful. Sealas comments that the Dragon Team, Android 17 and Android 18 seemed ready to fight a much stronger opponent, referring to Ahms. Sealas also comments that he's eager to collect more data from the Dragon Team and Androids 17 and 18. After the fight, Sealas commented that he collected more than enough data for his Ai life form, which would make him stronger, and that he also needed to further modify Ahms, which would make him more effecient and/or powerful.

Attained after absorbing 100% Full Power Frieza and Super Perfect Cell. He also retains this form upon absorbing Goku Black prior to absorbing Hit.

The result of Ahms absorbing Sealas after having previously absorbed Frieza, Cell, Goku Black and Hit. 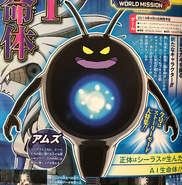 Retrieved from "https://dragonball.fandom.com/wiki/Ahms?oldid=1899502"
Community content is available under CC-BY-SA unless otherwise noted.