A Life or Death Battle! Goku and Piccolo's Desperate Attack!

A Battle with Their Lives on the Line! Goku and Piccolo's Fierce Suicidal Attack

The Enemy is Goku's Brother?! The Secret of the Mighty Saiyan Warriors!

Run in the Afterlife, Goku! The One Million Mile Snake Way!

"A Life or Death Battle! Goku and Piccolo's Desperate Attack!" (をかけたい! とピッコロての, Inochi o Kaketa Tatakai! Gokū to Pikkoro Sutemi no Mōkō, lit. "A Battle with Their Lives on the Line! Goku and Piccolo's Fierce Suicidal Attack") is the third episode of Dragon Ball Z Kai. This episode first aired in Japan on April 19, 2009. Its original American airdate was May 25, 2010.

Goku and Piccolo challenge Raditz, but the gap between their powers is too great. So, while Goku holds Raditz back, Piccolo fires his new special attack, the Special Beam Cannon. But Raditz manages to dodge it by a hair’s breath! Goku seizes an opportunity to grab hold of Raditz’s tail, but the cruel Raditz tricks Goku and escapes, and proceeds to torture him.

It’s at this point that Gohan, who had been locked up inside the spaceship, unleashes his dormant power with rage and body slams Raditz!! Astonished, Raditz tries to kill the now instantly powered-down Gohan, but Goku immobilizes him. As Goku says to shoot them both, Piccolo fires the Special Beam Cannon. The beam pierces through their two bodies!! In his death agony, Raditz’s last words are that the two remaining Saiyan out in space will attack Earth in one year. Bulma and the others arrive, having followed behind, and as they watch, Goku passes away as well.[1] 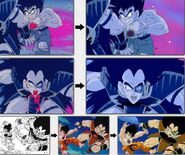